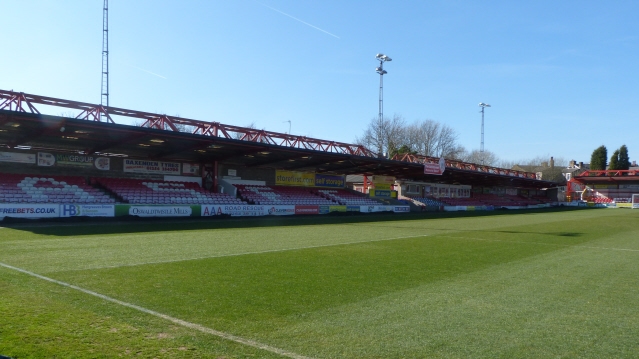 Back us at new prices: Coley

An adult match ticket is now £5 cheaper than 2015 at £15 on the gate to watch the seventh placed Reds at the Wham Stadium. *

Stanley last played at home on November  14th due to the horrendous weather in Lancashire over the last six weeks and so Coleman hopes the novelty of being at home and the new prices will persuade neutral fans to give Stanley a try.

“I love playing at home, I just love watching us play football full stop,” said the Stanley boss. “It’s been frustrating as it’s a long time since we have played at home.

“Hopefully the fans will get behind us.”

Coleman has had to deal with the news this week that Josh Windass and Matt Crooks will join Rangers at the end of the season with the Reds picking up significantly less than the £1.5m they have valued the two players at.

“Andy Holt, the new owner, has come out and said how unfair it is for a club like ours to lose out and hopefully this will bring more people through the gate to support us and see the football we are capable of playing,” continued Coleman.

“We were back to our best at Northampton and in flashes at Mansfield and I hope, if we can swell the crowd, then we can reflect that.

“If it’s economically viable to charge less and get more people on then you would rather have more fans as it makes for a much better atmosphere.

“The pressure for us is, that if we have a big crowd, we have got to deliver.”

Notts County sacked boss Ricardo Moniz at the end of December after the Magpies, who have Jon Stead and Izale McLeod in their ranks, dropped to 17th in the table.

There has been speculation as to who will take over all week  but Coleman knows that, with a permanent manager in place or not, County will be a threat.

“I have watched a lot of Notts County and they are a very dangerous side. They are a good footballing side and have some good players.

“But we have some good players and we know if we play well then it should be our day. Every game is massive between now and the end of the season for all different perspectives.

“Tomorrow there is only Bristol Rovers who are above us who are playing due to the FA Cup and so it’s vital to get three points as it is one of our games in hand.”