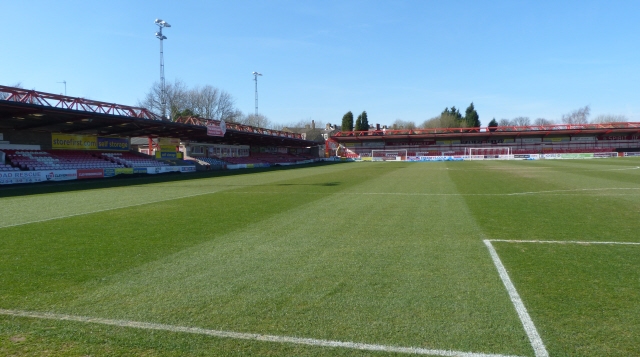 A new ‘Fan Zone’ will be built at Accrington Stanley, strengthening the club’s ties with the community and making home games a proper day out for the whole family.

The project is being run by the Official Accrington Stanley Supporters Club (OASSC) and is already off to a flyer, with a £22,400 head start.

OASSC chairman Nick Westwell explained: “Since last March we’ve been raising money to refurbish the changing rooms at the Wham Stadium and we were getting close to our £25,000 target. But everything changed for the better when the club’s new owner Andy Holt came on board in October, wiping out £1.2M in debt and bringing a significant cash injection to the club.

“Andy has plans for a more comprehensive redevelopment of the ground, including the changing rooms. I met with him and said we had this £22,400 already raised, but he said he’d rather see money raised by the fans spent on something that would bring a tangible improvement for them.”

The club’s new owner Andy Holt confirmed this, saying: “The fans and the supporters club have done a magnificent job raising this money, so I’m keen they feel the benefit of it. When the appeal started the changing rooms were the priority, but things have moved on and they need to be part of a much more comprehensive plan for the club, which is now taking shape.

“Accrington Stanley has always been a real community club and I think the Fan Zone project will build on that. It will engage the fans and help reinvigorate the club and its role in the community. It’s something the fans can get directly involved with and enjoy the benefit of for many years to come.”

Nick Westwell said the OASSC had now voted in favour of switching the fund to the Fan Zone project and building on it, setting a new target of £40,000 by June 1st next year. It will also investigate various sources of external funding.

He explained the Fan Zone would be a permanent structure where fans could gather two hours before home games and for an hour afterwards.

“We want it to have a real family atmosphere, a place where people can meet up for something to eat and drink and be entertained before and after the match. We want to enhance the complete matchday experience for fans, so it becomes a proper day out for the whole family.”

Nick envisaged it would be also be used for other social events and be available to the wider community as a multifunctional venue, strengthening the club’s bonds with the town.

“I’ve watched a lot of football in Europe and the Fan Zone concept has been going on there for a long time. It’s a massive community thing and even though it’s early days yet, we’re really excited about it.”

Nick was keen to thank all the fans who had raised money for the changing room project and hoped they would welcome the switch to the Fan Zone and the reasons behind it.

“It’s really important to thank everyone who’s raised the money, through our Grand Raffle, last month’s decima Dinner, the sponsored bike ride, buying club badges and memorabilia on matchdays or our eBay site, and many private donations. Going forward, we want all the fans – not just those in the OASSC – to get behind the Fan Zone project.

“We hope groups of fans and friends will organise their own fundraising efforts to help hit the target. If we can get this built I believe it will benefit all our fans and the wider community in and around Accrington.”

Anyone interested in getting involved with the Fan Zone project can call Nick Westwell on 07730 373433 or email: n.westwell@sky.com