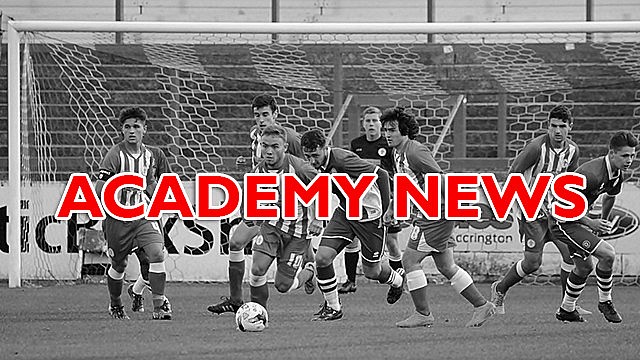 Plenty to build on: Lodge

Academy Manager Paul Lodge believes his side can learn a lot from their FA Youth Cup exit at home to Crystal Palace in extra-time.

Accrington’s Under 18s came back from 2-0 down but lost 3-2 to the Premier League outfit in the third round after a brave performance at the Wham Stadium.

Lodge said: “It is tough for the lads to take. It’s a big learning curve and it’s one they should take with them into each game they play.

“There were fine margins between us winning and losing against some really good players.”

Two goals in the first half gave Palace the initiative and Lodge feels the side made it too easy for the visitors to stamp their authority on the match from an early stage.

“We were very disappointed with our first half performance and we gave them too much respect.

“A Premier League club coming to Accrington on a Tuesday night should feel uncomfortable and we wanted to get at them.

“The lads were very disappointed at half time and I didn’t have to say much. They knew how important they’d built the game up to be and their families came to watch as well.”

A fighting comeback in the second half thanks to goals from Nathan Webb and Stuart Callaway gave the side great hope of a causing cup upset.

“The game looked out of sight after the first half, but I had a talk with the lads and made a change.

“The full time whistle affected our momentum. It gave Crystal Palace a chance to regroup and their fitness levels kicked in during extra time.

“We probably should have won in the end and no one would have had any complaints if we had.”

Despite their impressive form in front of goal, Lodge was left disappointed by the number of goals conceded on the night and in recent games.

He said; “It’s been frustrating for a number of weeks. Although we have been on a good run, we have conceded three or four goals in three games now.

“Not only can’t you do it against the teams in our league, you certainly can’t against a Premier League side.

“It’s an area we have got to improve on.”

The youth team are at home to Preston North End tomorrow (Friday), at QEGS with an 11am kick off.