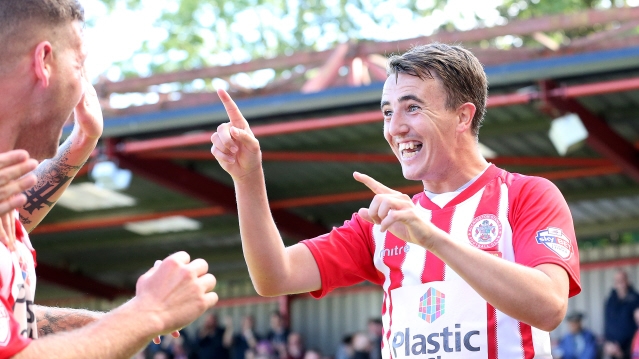 We must stay in the hunt: Sean

Stanley winger Sean McConville expects the promotion picture in League Two to be far clearer after the three festive fixtures.

The Reds host Carlisle United on Boxing Day before trips to Northampton on Monday and Mansfield Town on 2nd January.

John Coleman’s team sit sixth in the table and McConville thinks where they are in just over a week could prove to be important.

“Christmas is the busiest time of year for a footballer,” said the 26-year-old. “We play 26th, 28th and 2nd so the games are rammed in. I think after the round of games on the 2nd of January the league will start to take shape. I think if you’re in the top seven or eight come January you tend to stay there. One or two may drop out and one or two may spring up after a run but the aim for us is to stay there in that pack. I think if we’re there, we’ll end the season strongly and get a play-off place or even better.

“Teams are looking at us as a bit of a scalp now because of how well we are doing. In the past it’s been all that ‘little Accrington’ stuff and teams have expected to turn us over but it’s not like that anymore. Teams show us respect. They aren’t just expecting to come and beat us and we have to up our own game to counter that.”

The Reds are unbeaten in six league games heading into the clash with the Cumbrians and McConville’s keen to continue that run with a confidence boosting home win.

“Away from home we’ve been good and consistent,” he explained. “We do the same things at the same time and do them right. We need to lift our home form now. It’s usually the other way round and teams don’t like coming to our place but this season for some reason we’ve switched it a bit. We have to start turning our performances away from home in at home. If we can do that I’m sure we’ll end up in the top three or four.”

And despite an enforced break of two weeks due to postponements before last weekend’s draw at Stevenage, McConville has every faith that fitness levels in the squad are high enough to deal with the busy schedule.

“It was really important to have got back into action,” he concluded. “At Stevenage I was cramping up in the last five minutes and that doesn’t happen when you’re playing regularly. When you have a little break it’s hard to get your match fitness back so quickly.

“I think the lads found Saturday a bit tough but it’s a compliment to the gaffer and Jimmy that I felt we finished the fitter and the stronger side. To not have a game for two weeks and still finish fit and strong is a compliment to how they’ve kept our fitness levels up.”