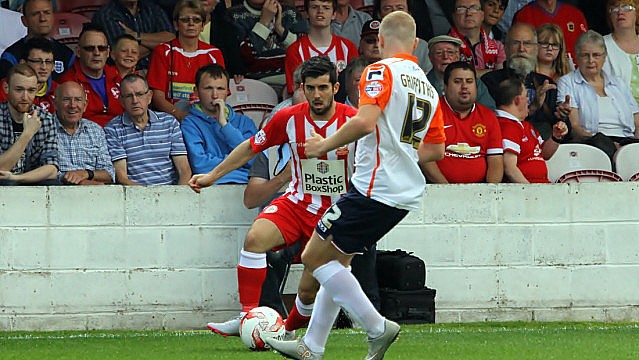 Stanley midfielder Piero Mingoia feels their FA Cup defeat at Portsmouth will spur the players on to continue their fine season in League Two.

The Reds lost 1-0 at Fratton Park in their second round tie and are now preparing for a return to league action at home to Wycombe at the weekend.

It was only a second away defeat since August for the Reds but the 24-year-old wants everyone to learn their lessons from the reverse.

“In many ways it’s a compliment to us that Portsmouth set up to try to stop us but we didn’t really perform to our best anyway,” he said. “Quite a few of us weren’t really at the races on Saturday and it showed. When too many aren’t playing too well then it’s hard to pick up wins.

“We’ve been excellent over the last few months and you know that you’re going to have setbacks. Sometimes you need a setback to wake you up again and it shows you that you haven’t arrived and that you can’t rest on your laurels.

“We’re in a good position in the league and we got to the second round of the FA Cup. We wanted to be in the third round but this kick up the backside we’ve had is about staying in the play-off places or keeping ourselves in the top four. It’s a lot nicer than the kick up the backside you get when you’re on the edge of the relegation zone and you desperately have to win games.

“As a group we’ve been playing really well for the past few months. There have been one or two below standard performances but the way we’ve reacted to those shows that we have ambitions to keep doing well and stay right up there.

“We need to react in the same way to the defeat at Portsmouth and get ourselves right back on track.”