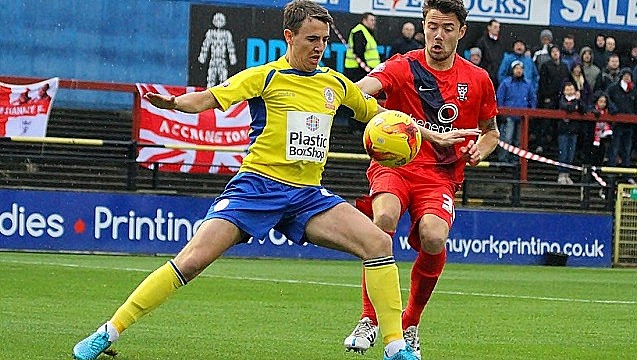 Sean McConville says Stanley are just clicking into gear – and so they are more than ready for their Emirates FA Cup second round clash at Portsmouth.

When the Reds travelled to pre-season League Two title favourites Portsmouth in September, the game finished goalless – with most people seeing it as a great result for Stanley.

However, John Coleman’s men, favourites for relegation with the bookmakers in pre-season, have continued to surprise many and are now above Pompey in fourth place in League Two.

And winger McConville says there is more to come from the Reds.

“The FA Cup is obviously a big game for the club financially and there is the Accrington connection with Paul Cook their manager and Leam Richardson their assistant as well as Gary Roberts playing there so it will be interesting,” said McConville.

Stanley go into the game on the back of putting five past York and, while McConville didn’t get on the scoresheet, he played his part in a number of the goals.

“I think we can play better than we did at York but we won 5-1 at a fellow League Two side and that’s a good result.

“I think I did everything but score but my job is in midfield to chip in with assists and I got two or three on Saturday so as long as I keep doing that, I am happy.”