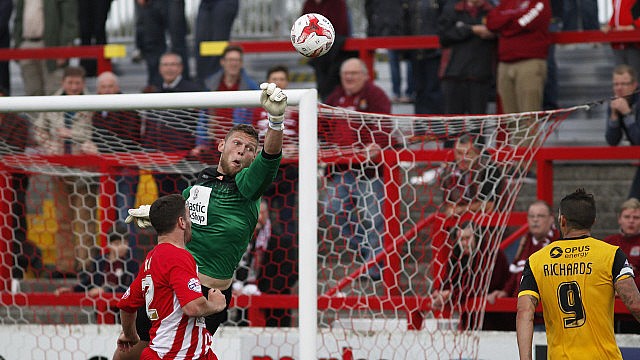 Up for the cup: Mooney

Jason Mooney believes Stanley are playing better than when they last faced Portsmouth – so the Reds will travel to Fratton Park in confident mood.

Stanley will face Paul Cook and Leam Richardson’s Pompey in the second round of the FA Cup after the draw was made tonight, following a goalless encounter there in League Two earlier in the campaign.

Goalie Mooney admitted: “In some ways, you want to draw a team you don’t play regularly but we have drawn Portsmouth and now we will prepare for that.

“It’s a team we know, a team we have played recently and it’s a good stadium with a large crowd. When we played there in the league we drew 0-0 and I think we have improved since then.

“They are in a similar league position to us so it should be a good game. The gaffer (John Coleman) obviously knows their management team well and some of their players and so he will know their ways and their tricks so we will go there and be positive.”

Both Cook and Richardson managed Stanley while Pompey have ex-Reds Gary Roberts, Jayden Stockley, Kal Naismith and Rommy Boco among their numbers.

“If we can go there, play like we did last time and nick a goal then that will suit us!” added Mooney.

“I am happy with the draw,” said Stanley’s majority shareholder Andy Holt. “We will go there with no fear and I do not see why we can’t beat them.”