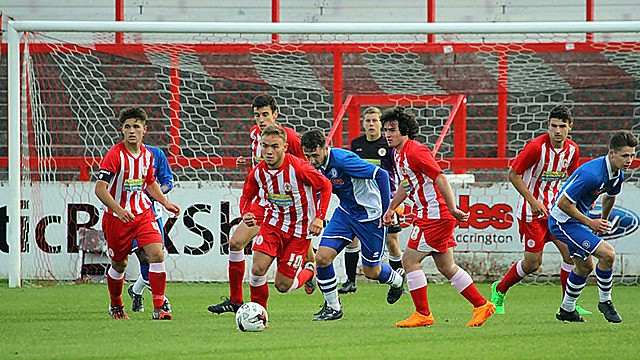 Stanley’s under 18’s side begin their FA Youth Cup campaign tomorrow night at the Wham Stadium.

The young Reds take on Basford United in the first round of the competition.

“The youth cup is one of the highlights of our season,” said Academy Head of Coaching Dave Fitzgerald. “It’s something that the players and coaching staff look forward to.

“It was good to get the game in against Burnley at the weekend (which Stanley won 2-0) and that’s set the lads up in the right frame of mind.

“We’ve seen a bit of Basford and like a lot of non-league sides there are a lot of good players in their team. We expect them to cause us problems and we know that we need to take care and do our jobs properly.

“It would be great for the players to experience having a crowd in to watch them and support them. Hopefully we can also give supporters an idea of the sort of talent that we have coming through. There could be players on both sides who become familiar names in the future.”

Kick off at the Wham Stadium is 7:30pm, with admission just £3 for everyone.