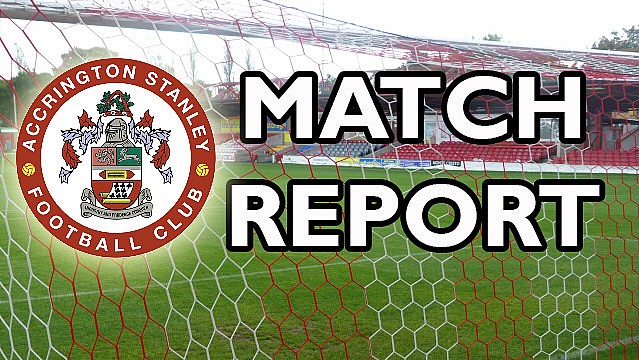 Stanley booked a place in round two of the FA Cup with a 3-2 win over York City.

Sean McConville, Matt Crooks and Josh Windass were on target as the Reds overcame the Minstermen and the elements at the Wham Stadium.

The sides sized each other up early on with Matty Pearson and Windass trying their luck for the hosts early on but neither goalkeeper was called into serious action until the mid way point of the first half.

First Scott Flinders had to race from the York goal to thwart McConville after he capitalised on a defensive error before Jason Mooney denied his old club with a good save from Vadaine Oliver.

With 28 on the watch the Reds went in front with Crooks and then Piero Mingoia helping the ball to Windass who found McConville inside the area on the left. The wideman was in space and lashed a strike off the inside of the post to make it 1-0.

The lead lasted just five minutes as the visitors quickly hit back through Oliver. Bryn Morris did well to beat Brad Halliday down the left and cross for the striker to convert despite the efforts of Tom Davies to clear the ball off the line.

But it wasn’t 1-1 for long with Stanley restoring their advantage almost straight away thanks to Crooks. The former Huddersfield man was threaded in by Windass down the left and kept his cool to find the bottom right corner of the net.

2-1 was the half time score despite Halliday shooting wide and Mooney saving from Coulson.

There was little time to catch any breath after the interval though, as the home team extended their lead from the penalty spot. Billy Kee looked to have a good chance inside the box when he appeared to be pushed by Femi Ilesanmi and ref Fred Graham agreed, pointing to the spot. Windass stepped up and dispatched his ninth goal of the season with an audacious dinked penalty to make it 3-1.

Minutes later the Staney striker was denied a second from a free kick on the edge of the box that Flinders parried before Halliday ran confidently into the box and shot inches wide of the left post.

Steady second half rain then became torrential with both sides struggling in challenging conditions. York sub Jake Hyde fired into the side netting before Mooney produced a wonderful save to shovel out Oliver’s point blank header and the Reds went close to extending their lead when McConville lobbed over the bar.

Coulson headed home in three minutes of added time to pull it back to 3-2 but Jackie McNamara’s men were unable to find a late leveller.