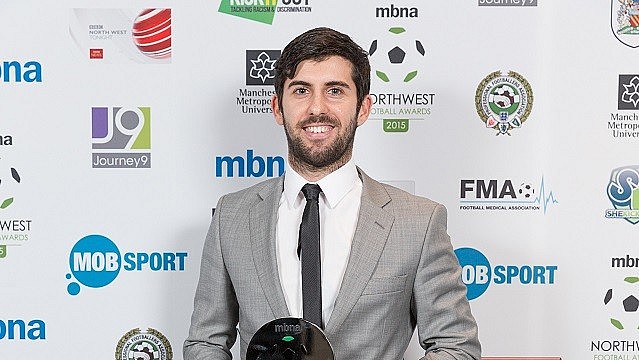 Piero Mingoia said he was shocked and proud to be win the League Two Player of the Season at last night’s North West Football Awards.

The awards were for the 2014/15 season where Mingoia scored eight goals after battling to secure a first team spot in the early months of the campaign.

He was presented with his award by former Liverpool and Blackpool midfielder Charlie Adam at Lancashire Cricket Club.

It made it a double win evening for the Reds with Josh Windass winning the MOB Rising Star Award.

“It’s been a great night for the club,” said Mingoia. “I kind of expected Josh to be up there with a chance of winning.

“For myself, I was just happy to be nominated and I realised when I got here what a big event it was. I was happy with my season because I scored some goals  and contributed to the team. This just tops it off.”

With Stanley challenging for promotion, winger Mingoia has high hopes of playing at a higher level.

“Hopefully I can do that with Accrington. We have been involved with a big investment so the club is only going one way and that’s upwards.

“It’s a credit to everyone running the club for the last 10 years. Everyone knows the budgets haven’t been the biggest but now, thanks to keeping the club up, they’ve got the reward of a big investment.”