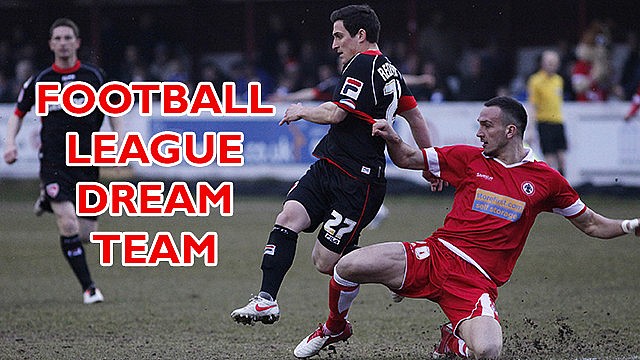 Now that the votes have been cast and the line up decided, we’re catching up with the players to find out their views and what’s happened to them since leaving the Wham Stadium.

This time, it’s our second centre back.

The enduring image of Tom Aldred in Stanley colours is of a battered, often bloodstained figure putting his body on the line for the cause game after game.

The centre back became a mainstay of the side under Leam Richardson, James Beattie and John Coleman, notching up a run of 94 unbroken appearances for the club.

But his career before heading down Livingstone Road, which included time at Carlisle, Watford, Colchester and Barrow was a very different story.

“My background before Accrington was pretty nomadic,” he explained. “I’d been dotted around the country, I took a bad move to a big club early on as a young lad and that sort of backfired on me. It’s why I always advise lads now that you have to play and be a mainstay not move and be a bit part player, which happened to me.

“To go to a club like Accrington was designed to just get a few games under my belt. One led to two and then lots. I think I only now realise what and achievement it was to play all of those games in a row. As soon as I got to Blackpool I was suspended for getting sent off, I had injuries and then got suspended for five yellow cards. There must’ve been an element of luck to it but it was a great thing to achieve.

“The difference in me is incredible. The experience I gained from the club was fantastic. I arrived feeling like I’d only served an apprenticeship in a job, the basic training, and when I left I felt so experienced.

“I’ve played games in higher divisions now that haven’t been as tough as playing for Accrington in League Two. There were pressure games, relegation battles and when I first arrived every game was make or break.

“I don’t think you’ll ever cap the end to the season we had when I first came in. Even if I go on to win a league in the future I don’t think the feeling will be better than when we survived that year. In the last ten games we were incredible. Many people considered us down and we stayed up comfortably in the end. We had an amazing team spirit and I keep in touch with a lot of that team.”

The 25-year-old didn’t look back after making his Reds debut as a sub in a famous game at Rochdale but believes he owes both his Stanley career and his move to current club Blackpool last January to a former assistant manager.

“Sometimes what it takes in football is for someone to have some faith in you,” he said. “When I first came in I think it was Paul Stephenson who liked me and Leam Richardson probably didn’t like me so much. He put that faith in me and hopefully I repaid him.

“He was then at Blackpool when I moved. It’s a big club and he helped get me the opportunity to go and play at a higher level. He’s not here now but I’ve been able to do that and I’m thankful for the chance.”

Aldred may have moved on to pastures new and be concentrating on helping the Seasiders up League One but he feels he’ll always hold the club that allowed him to put down footballing roots in a special regard.

“To be voted as one of the best players to play for the club in that era is something that I’m very proud of,” he concluded. “There have been a lot of good players at the club during the time in the Football League.

“I don’t know a lot of the lads at Accy now but I know the staff and a few of the players and I’m not shocked to see them up there. It’s a great achievement so far and they are the first results that I look for after our games are finished. I’m really happy for the management, the players and the fans. I hope they can keep it up!”