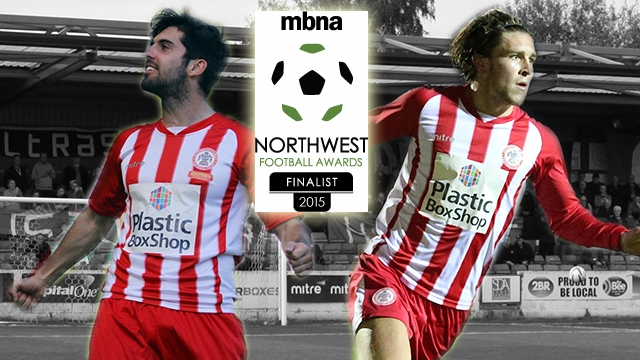 Double win for Piero and Josh

Winger Mingoia swept the board at Stanley’s presentation evening last season and won League Two Player of the Year at the awards at Lancashire Cricket Club last night.

The Awards ceremony was attended by 500 guests and hosted at the Point, Emirates Old Trafford by BBC TV and Radio presenter, Dan Walker.

All awards related to the 2014-2015 campaign with Manchester City’s Sergio Aguero winning  the Premier League Player of the Season after his 26 goals.

City bagged a brace of trophies as England midfielder Jill Scott, a bronze medallist with the Lionesses at the 2015 World Cup, was crowned Women’s Player of the Year for a second successive time.

In the Championship, Blackburn Rovers’ Swedish born defender, Marcus Olsson was the winner while Preston’s Paul Huntington was voted top player in League One and Simon Grayson was Manager of the Year.

The Awards, now in their ninth year don’t only recognise achievement on the pitch but celebrate the work of the Northwest football family in all areas, especially the outstanding contribution from the club’s community departments.

(a full list of nominees can be found at www.northwestfootballawards.com)

Players of the Year:

Female Player of the Year:

Manager of the Year:

Community Initiative of the Year:

Community Club of the Year-Premier League

Burnley FC in the Community

Community Club of the Year-All other Leagues

Journalist of the Year: