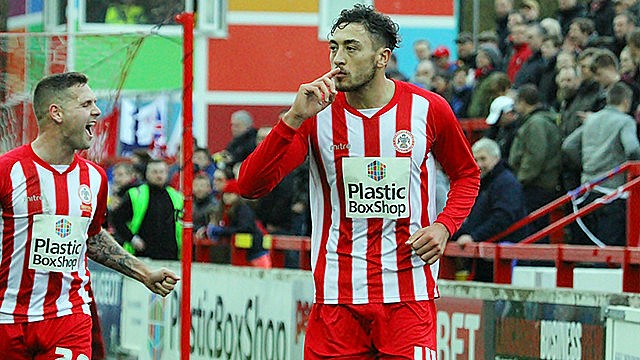 Crooks wants to be goal-den

Matt Crooks says there is a friendly competition between him and Josh Windass to finish the season as Stanley’s top scorer.

Both scored in yesterday’s 3-2 win over York City which saw the Reds reach the second round of the Emirates FA Cup with the draw made tomorrow night.

Crooks scored a superb solo goal to take his tally to six goals for the season whereas Windass is leading the way with nine following his cheeky penalty against the Minsterman.

“I keep saying to him that I will catch him up but every time I score, he scores,” said 21-year-old midfielder Crooks.

“We have talked about it so there is a bit of a competition going on. I did love his penalty though. I knew he was going to dink it rather than hit it and it was a great penalty.

“For my goal, Josh passed to me which is a shock in itself as Josh loves to keep hold of the ball! But I had missed a one-on-one in a similar situation against York last season and their fans gave me some stick so it was nice to see it go in.”

Crooks is winning praise from his team-mates, fans and the opposition alike and he admits he is loving his football after being released from Huddersfield last January and joining the Reds soon after, following a loan spell at the Wham Stadium.

“It’s the best season I have felt playing football,” said Crooks. “But I am more happy with the team. We are doing well in the league and now we are through to the second round of the FA Cup.

“Football has its ups and downs and I have experienced both sides of it. All you can do is try and be consistent and not get too high with the good times or too low with the bad times.”