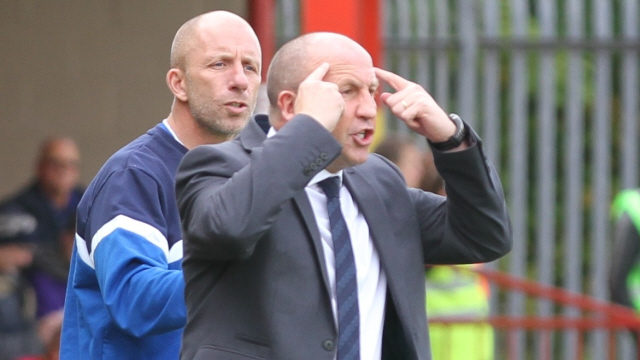 John Coleman admits his Stanley team are hurting – and they want to put it right against Dagenham and Redbridge on Saturday.

Not only are the Reds looking to bounce back from successive defeats but they are also still smarting from April’s 4-0 loss at Dagenham.

“I want to get revenge for that as they gave us a real battering,” said the Reds boss. “We want to put that right on Saturday.”

Coleman also wants to get the Reds back on track after losing to league leaders Plymouth on Saturday, despite a strong show, and then what the Stanley manager described as an ‘abject’ second half performance in Tuesday’s 4-3 loss to AFC Wimbledon.

“I have watched it time and time again and the harsh reality is Wimbledon were better than us. I don’t like saying it but that’s the truth.

Coleman is battling a defensive injury crisis with Adam Buxton, Joe Wright, Dean Winnard, Tom Davies and Liam Wakefield all in the physio room this week.

It meant just loan right back Brad Halliday and Matty Pearson were able to train on Thursday alongside young defender Liam Goulding, who had just started a loan spell at Ashton so couldn’t be recalled.

“It is an injury crisis, there is no getting away with it,” said Coleman. “And every player who gets injured at the moment is a defender.

“But we do have players who can step up in the squad and we may have to ask them to do it but I have faith in these players.”

Some good news is that Matt Crooks returns after sitting out his one game suspension for five yellow cards.