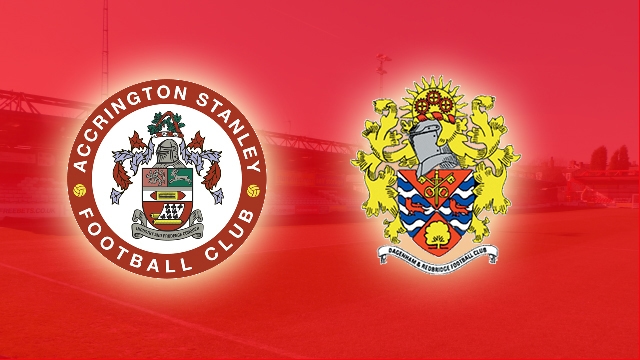 Stanley surged back into the League Two play-off places with a comfortable win against Dagenham and Redbridge at the Wham Stadium.

Goals from Seamus Conneely, Matty Pearson and Josh Windass did the damage in a dominant performance, with Nyron Nosworthy’s goal on the hour mark proving nothing more than a consolation.

John Coleman spoke before the match about his desire to get back to winning ways after watching his side surrender a two goal lead to AFC Wimbledon in midweek, and the Stanley boss will have been delighted with the way his side responded.

There were to be further defensive injury woes for the manager however, as Adam Buxton – who hadn’t trained during the week but was thrown back into action for this encounter – was forced off with just six minutes gone. His replacement, midfielder Anthony Barry, operated as a makeshift right-back but he too was withdrawn late on with an injury.

The Reds made their intentions clear inside two minutes as they took a deserved lead. Dagenham failed to clear Windass’ low corner from the left, and the ball eventually fell to the skipper Conneely who gleefully rifled home from 12 yards out.

Buxton’s injury was the only blemish on what had been an otherwise complete 45 minutes, in which Billy Kee, Sean McConville and the recalled Matt Crooks saw efforts blocked, missed and saved respectively as Stanley exerted real control.

A quieter spell in play then followed, but that was brought to an abrupt end as Stanley doubled their advantage. Windass’ initial corner was hacked behind for another and when the midfielder sent in a follow-up delivery, defender Pearson rose highest to crash home a header.

Buoyed by their comfortable margin, Stanley began in exactly the same vein in which the first had started – with a goal. The lively Mingoia floated over the perfect cross from the right, and Windass duly obliged by nodding home a third goal past O’Brian to add deserved gloss to the scoreline.

That third strike summoned Dagenham into life, and following a brief spell of pressure, they grabbed a potential lifeline. Substitute Jodi Jones showed good footwork down the right to engineer space for a low cross, and Nosworthy was on hand to steer the ball home to give the visitors faint hope of a comeback with an hour gone.

Dagenham shored up their defence from then on, but it proved too little too late. There was still time for Joe Wright to have a goal ruled out for offside from a corner, and in truth a goal from the defender would not have flattered Stanley, who were simply unplayable for long spells of the match.