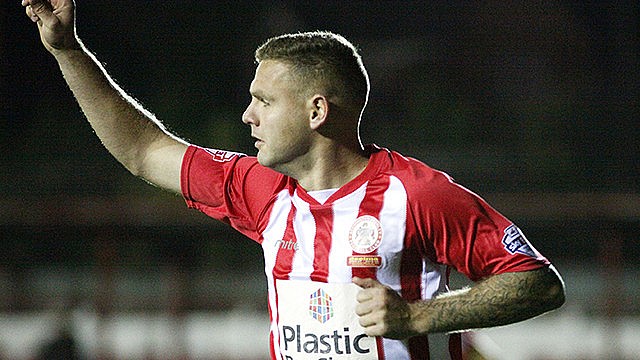 Billy Kee doesn’t expect a return to winning ways to be easy when the Reds host Dagenham & Redbridge tomorrow.

John Coleman’s side have lost their last two games, including Tuesday’s 4-3 reverse to Wimbledon in which Kee found the net twice.

Now they are preparing to take on Wayne Burnett’s side who sit 22nd in the League Two table with the striker expecting a difficult afternoon regardless of that league position.

“We know that Dagenham are going to be good,” said the 24-year-old. “We have to prepare right because if we don’t we’ll have a shock again. I think I know that and a lot of the older heads in there know that but we have to remember that a lot of the younger lads haven’t even played league games before this year.

“I know Dagenham and if they are on their day attacking-wise then they’ll be hard to stop for even a good back four. We will do everything we can to win the game and I think we’ll do it.”

And that’s a concern for everyone in the dressing room.

“The injuries must be frustrating for the gaffer,” admitted Kee. “As attackers we can concentrate on the attacking play but he doesn’t know what he has defensively and who might come in and be available. It is a bit of a nightmare for us because we can’t work on what we need to work on.

“I’m sure the gaffer and Jimmy will work something out and get the best team out there that they can. I think we have enough in the squad to sort this out.”

Kee’s goals on Tuesday took him to five for the season, one behind leading scorer Josh Windass.

But he’s happy to forego the goalscoring glory if it means three points tomorrow afternoon.

“You’ll always get more satisfaction from scoring a goal yourself but it’s a relief when you set someone up because you know you’ve done something for the team,” he said. “You think that maybe you haven’t got the headlines but you’ve set up Josh or Crooksy. I think anyone would choose winning games over scoring goals and if you don’t you’re probably a very selfish person.”