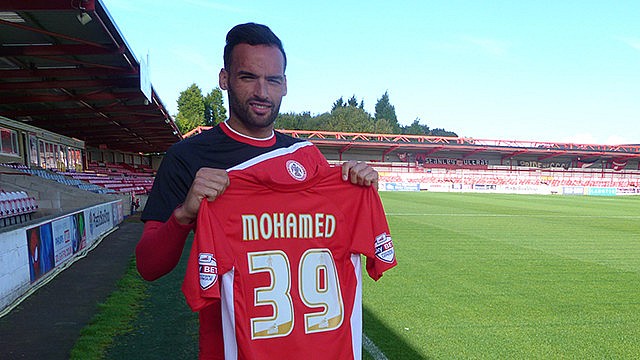 Kaid keen to kick off

Kaid Mohamed can’t wait to get his Stanley career started after joining the club on non-contract terms.

The Welsh winger comes into the squad for tomorrow’s trip to Barnet after training with the Reds for a short period following some time out of the game through injury.

Now he’s raring to go as he looks to break into the team at the Wham Stadium.

“I came up for a bit of a trial game really and I knew straight away that there were some good footballers here,” revealed the 31-year-old. “I’ve watched the team a few times and it’s a really strong squad. I can’t wait to be involved in it.

“I’m really good friends with Jimmy Bell, I’ve worked with him before and he knows what I’m about. It’s great to have competition because it pushes you for your place.

“There’s nothing worse than being injured. I was having a great season for Northampton but what can you do? Nobody likes to get injured but you just have to get fit and go again.

“I’m hungrier than ever now. I want to prove something to myself and other people, get playing again and get some minutes in me, help the team, create some chances and score some goals.”

Former Swindon, Cheltenham and Bristol Rovers man Mohamed could make his bow for the Reds at the Hive and believes there’s a determination in the dressing room to make amends for last weekend’s defeat to Oxford.

“The boys have been flying and been on a high so it was a bit upsetting to lose last week but I’m pretty sure they can’t wait to get back out there again, get the job done and get points back on the board,” he said.

“All I can do is train hard and hopefully the manager picks me or gets me involved in the squad. I’m here to do well and show the manager I’m good enough to be in his squad.

“I got a nice couple of goals on Tuesday (in a behind closed doors game at Oldham) which was good. It’s always nice to score but nicer to get minutes under my belt and get fitter and I’m feeling good and sharp and can’t wait to get out there again.

“I’ve been in League Two a few years now so I know what it’s about and how physical it is. I’m looking forward to playing in it again.”