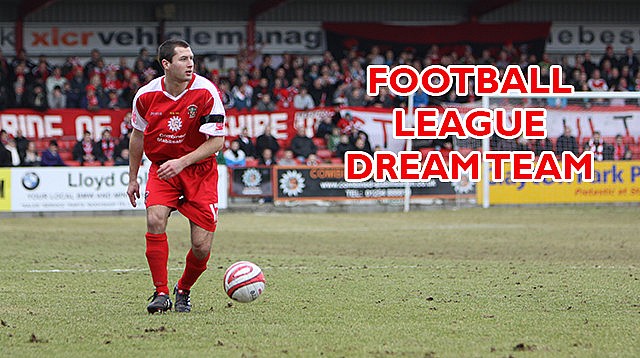 Now that the votes have been cast and the line-up decided, we’re catching up with the players to find out their views and what’s happened to them since leaving the Wham Stadium.

This time, it’s one of our defenders:

Phil Edwards says Accrington Stanley will always have a special place in his heart.

The defender came to the Reds, initially on loan, from Wigan in October 2005 and was signed permanently in January 2006.

In that year, he helped Stanley win the Conference title and then, five years later, he played a massive part in helping the unfancied Reds reach the League Two play-offs.

After Stanley’s semi-final loss in 2011, Edwards moved onto Stevenage – who gained promotion to League One via the play-offs that season – and then had a loan spell at Rochdale under Coleman.

Now he is settled at Burton Albion, who he signed for in 2013, where he played his part in guiding them to League One last season.

But his six years at Stanley were special to Edwards, who turns 30 next month, and he was delighted to be selected in their Football League Dream Team.

“I am overwhelmed if I am honest,” said Scouser Edwards. “It’s great that it’s the fans and my team-mates and it’s a nice gesture. It’s always nice to be appreciated.”

Edwards came to Stanley as a young defender from Wigan, along with Kevin Lee, to get some experience – and then never looked back.

“Accrington gave me my chance and I will always be grateful for that. I will always appreciate that John (Coleman) and Jimmy (Bell) gave me the chance to learn my trade.

“I got the chance to play proper football against real men where kicks and bruises were part of the every day experience and it was a great learning curve for me.

“I came with Kevin Lee and he was really unlucky with injuries – it is a fine line between making it or not as that easily could have been me.”

Edwards said he loved playing under Coleman and Bell and said the two of them inspired him to go on and make more than 450 appearances in league football.

“The squad had a great togetherness in all my time at Accrington,” said Edwards. “The team spirit instilled by John and Jimmy meant it was a pleasure to come into work every day and you wanted to work hard on the training pitch.

“You knew if you did not do something right, the gaffer and Jimmy would be on your case. They could be your best mate but you also had to be ready to work hard or else face their wrath.

“At Accrington, it was always a ‘them against us’ attitude as we were the bookies favourites to go down every season. We were always fighting against it and that meant there was a closeness in the squad.

“The team spirit at the club was unbelievable and it was the best I have had in my career.

“We went into every game full of confidence, believing we would do well. In 2011, we had the squad and players who we knew could get promoted and we never doubted ourselves. We met the challenge but fell away in the play-offs which was obviously gutting.”

Edwards hailed the players he played with during his time with the Reds.

“Gary Roberts was the best player I have played alongside. He was unpredictable, he had quality on the ball, he scored a lot of goals and he always had that extra bit of something.

“Paul Mullin was a gentle giant. He was absolute quality. He was a great leader and he was loved at Accrington. He is a thoroughly nice guy but he was also a good footballer and a target man for us which we used to good effect.

“I always look for Accrington’s results, they are always a club close to my heart and John and Jimmy are doing it again and I hope they get promoted this season.”

For Edwards, his full focus is now on Burton under Jimmy Floyd Hasselbaink as he looks to help take them into the Championship following promotion last season.

“I am enjoying my time at Burton. I was signed by Gary Rowett and he left and then it was a bit topsy turvy for a while but Jimmy came in and we haven’t looked back.

“Burton is a well-run club. The chairman Ben Robinson has made sure there is no debt, he has built a new stadium and it is a club that is run really well.

“It’s great working under Jimmy. I never would have believed he would be my manager but he has taken to management really well. He has played at the highest level so it’s great to learn off him and he is also learning off us.

“We have started off well this season although hit a bit of a sticky patch but we will just see where we are in March/April time and assess our situation then. Of course I would love to play in the Championship, I want to play at the highest level I can, but we will see what happens.”