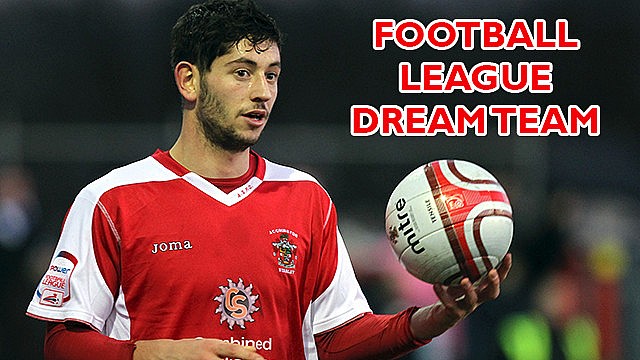 Now that the votes have been cast and the line-up decided, we’re catching up with the players to find out their views and what’s happened to them since leaving the Wham Stadium.

This time, it’s the left back.

When Joe Jacobson looks at the League Two table, he now expects to see Accrington Stanley towards the top end.

The former Reds full back is aiming for the top of the fourth tier with current club Wycombe but believes the return of John Coleman and Jimmy Bell has turned Stanley back into contenders.

“It’s not a surprise to see Accrington back up there,” said the 28-year-old. “They always recruit really well. They’ll never have a massive budget but there are teams in this league paying massive wages and they aren’t up there.

“They get the best out of players and they have great links with clubs in that area and will therefore sign good players. The likes of Windass and Crooks have been on fire this season and with players like that they are going to do well. If they carry on the way they are I think they’ll be right up there challenging for the play-offs and promotion.

“Coley and Jimmy have always been known for playing great football and it’s really good to watch. When we play Accrington in December we’re expecting to have our work cut out to get the points.”

Jacobson should know about contending for promotion. He was a mid-season arrival in the 2010-11 play-off campaign, making the left back slot his own after arriving from Oldham Athletic.

He remembers the management team being crucial to the success that saw the team finish fifth.

“We had a great time,” he explained. “You know what Coley and Jimmy are like. They make it really enjoyable and it was different to everything I’d experienced before or since. That’s probably what made it all the more special.

“I had a bad spell at Oldham with injuries and not being in the team and as a player all you want to do is play games. It got to a point where I was desperate to play. I remember playing a reserve game at Accrington and speaking to Jimmy afterwards. I’d enjoyed my loan a few years before and I was thankful to the club for giving me my first opportunity in league football so I thought I’d go back and it worked out well for me and the club.

“You can always look back at any season you play in football and wonder what might have been but I look back on that season very fondly. Nobody expected us to do anything that season and I think at one point we were something like 18th so to have a ridiculous run like we did was awesome. There was such a great feeling going into every game, almost knowing we were going to win, especially at home. It was a great thing to be a part of.”

With an initial loan spell from Cardiff added to the play-off season, Jacobson only made 36 Stanley appearances, going on to play League One football for Shrewsbury before joining last season’s surprise package Wycombe.

“It was quite surprising to hear I’d been selected (for the Dream Team) as I didn’t play too much there,” he admitted. “In my second spell we had a very successful season so I can understand why the fans relate back to that team and have put a few of us in from that year. It’s just really nice to be mentioned for it, let alone selected. I loved my time at the club even though it was quite short.

“There are a lot of good players I’ve played with over the years that have dropped out of the league. I have to be thankful to Coley and Jimmy for giving me the chance to play. At the end of that season a few teams were interested and I decided to go to Shrewsbury. I had a successful time there and then with Wycombe last season we came very close to a promotion that nobody was expecting. It was similar to the kind of team spirit we had at Accrington that season.”