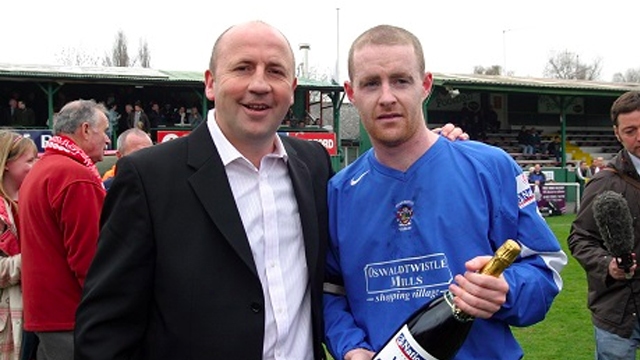 Now that the votes have been cast and the line-up decided, we’re catching up with the players to find out their views and what’s happened to them since leaving the Wham Stadium. After Marcus Bettinelli made number one, we catch up with our right back – Peter Cavanagh

Peter Cavanagh feels he has unfinished business at Accrington – so beware John Coleman!

Cavanagh, now 33, was the youngest skipper of the Reds, age 19, joining the club in 2001 when Stanley were in the UniBond Premier League after his release from Liverpool.

“To be honest, and I am trying not to sound like a snob, but I did think I would come to Accrington and be here maybe a month after joining from a Premier League Academy,” said Cavanagh, who was Stanley’s most successful captain overseeing two  promotions.

“But then one month turned to one year, one year turned to two and then that turned to five years and so on. The thing is the club was always developing when I was here.

“I had offers to go elsewhere during my time at Accrington but I never wanted to as it was always a steady progression and a new challenge so I never felt the desire to leave.

“It was a great time to be at Accrington. The dressing room was superb, it was a real brotherhood which John (Coleman) and Jimmy (Bell) created and I made friends for life.

“I had a lot of good times there and the majority of the time I look on with fondness and it’s the first result I look for.”

‘Cav’ smiles as he reflects on the players he played alongside during his eight years at the club.

“There were a lot of talented players in my time there such as John Miles, who had so much potential, and Gary Roberts who has gone on to do great things. Then there was Paul Mullin – he wasn’t the best player I have played with in terms of ability but he is the best player in terms of making me look good!

“As a full back I could play a bad ball up front and Mullers would somehow make it look good and get me out of trouble. He saved me on a number of occasions.

“The games which stand out for me are Droylsden early on in my Stanley career when we won 5-2 and I scored a goal from the halfway line.

“Bournemouth away in the FA Cup was another highlight. It was just the whole occasion, it was our Christmas party that night, listening to the draw – that was a big moment for the club.

“Then there was our game at Exeter on Sky which virtually secured our promotion to the Football League – and it was a good tackle no matter what anyone says!

“Then there was a scuffed effort against Torquay in the game where the fans came in for free – that was probably my most important goal as it went a long way to making us safe in our first season back in the Football League. Great memories!

“I don’t think anyone lifted as many trophies as me – mind you I didn’t get to raise them for long as I always had to pass them onto Coley!”

Modest Cavanagh was surprised to be in the Football League XI.

“I don’t think I had a lot of competition for the right back spot as I played in it for so long! There weren’t  many alternatives so I think I got in by default,” said Cavanagh, who now works full-time at Everton.

“I have looked at the team and it’s a good one. I would have liked to play in it.”

‘Cav’, who also had to cope with injuries and the sudden death of his brother during his time with the Reds, admitted his Stanley career ended abruptly as he was caught up in the betting scandal of 2009 where he received an eighth month ban for betting against his own team on a £5 accumulator.

Stanley players David Mannix, Jay Harris and Robbie Williams and Bury striker Andy Mangan were found to have placed thousands on a Stanley loss to Bury at the end of the 2008/9 season and these were fined and banned for up to a year.

“It still leaves a sour taste and I do feel I was mistreated, compared to the others,” said Cavanagh. “I came back to watch Accrington during my ban though and all the fans were great.

“I think a lot of them understood my situation and understood it was different to the others.

“When I came back with Rochdale I was fearing the worst but I got a really good reception and it’s something I appreciated. I hold the Accrington fans in high regard and it good to know some of them felt the same.

“I do feel I have some unfinished business with Accrington and do feel our paths will cross again. When Coley is ready to step down, I am ready to take up the baton,” added Cavanagh, who does have his coaching badges.

And he says he can never can get away from Accrington, despite going onto Fleetwood, Rochdale and Altrincham.

“It’s always there or someone is always mentioning it. I used to coach Adam Morgan when he was 10 at Liverpool Academy for example and, the other Friday, I walked out of Everton and straight into Billy Stewart, Accrington’s goalkeeping coach.

“Because there were such a lot of Scousers at the club I never get away but I like that. I think of my time at the club with fondness. It’s easier coming back to Accrington than any other club I have been at. I have a good feeling for them this season.”