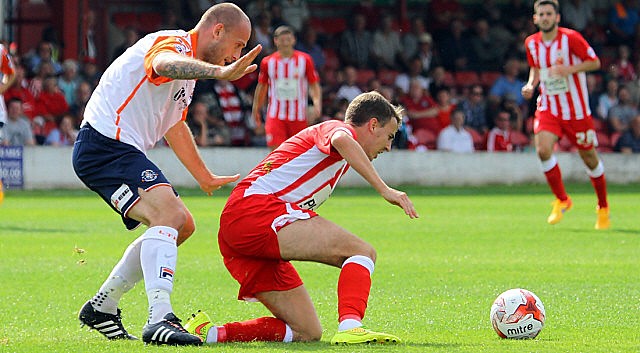 Sean McConville hopes he has used up all his bad luck in one game after he did everything but score in the 1-0 loss at league leaders Plymouth.

McConville hit the woodwork twice and was denied by in-form keeper Luke McCormick who won Plymouth’s Man of the Match after keeping out the Reds.

“You have got to take the positives out of it, they are top of the league and we have dominated the game,” said the winger.

“How we haven’t even drawn  the game, never mind won the game,  is beyond belief and we have  to try and take the positives from it into Tuesday’s home game with Wimbledon.

“Plymouth are top of the league and even the staunchest of Plymouth fans would say we could have won by three or four.

“Even their captain said to me at the end you didn’t deserve that and that’s their captain so every other person in the ground could see that we should have won.”

McConville admitted he couldn’t believe his chances which went begging.

“I think I must have crossed paths with a witch this week as it just wouldn’t go in for me.

“Then their  keeper has pulled off a good save down to his left for the third one and  it was one of those days when it just wouldn’t go in. And they had one good chance and to be fair their lad took it well and they have scored with a worldy.

“But as long as we keep getting chances and keep working the keeper and not hitting the bar but finding the net I am confident I will score more goals.”

And he is sure the Reds will continue their promotion push.

“We have a good team here. Plymouth are now  seven points  ahead of us and that’s a benchmark for us.