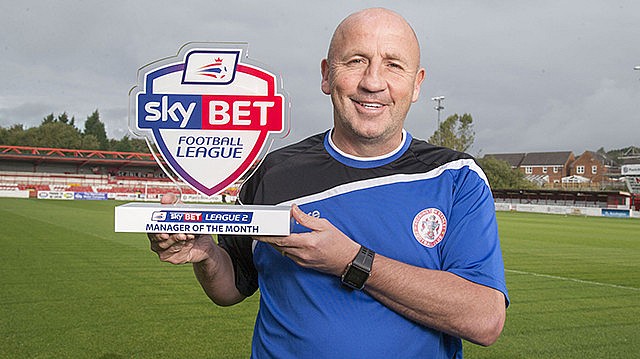 Coley wins Manager of the Month

John Coleman has won the Sky Bet League Two Manager of the Month award for September.

He led Stanley to four victories in the month and beat off competition from Carlisle boss Keith Curle, Ricardo Moniz of Notts County and the Luton manager John Still for the prize.

“It’s a team effort and a good compliment to all the staff and the players but mainly the players,” said Coley. “Sometimes in the past when I was here we probably should have won it but haven’t for whatever reason.

“If you can get on a little run in this league it’s not about winning awards, it’s about getting yourself as high up the table as possible.

“I wouldn’t mind winning it two or three more times this season because that means we’ll probably be a cert for the play-offs!”

Stanley midfielder Matt Crooks missed out on winning the Player of the Month after being nominated but Coleman thinks he deserves plenty of credit for his performances this season.

“It might be a surprise to some but not to us,” he said. “Anyone who saw pre-season here saw Crooksy come back a different animal. We knew he had the potential and that’s why we signed him. He’s starting to deliver on that and will only get better. When he’s on song it’s frightening to think that he’s playing at this level.”