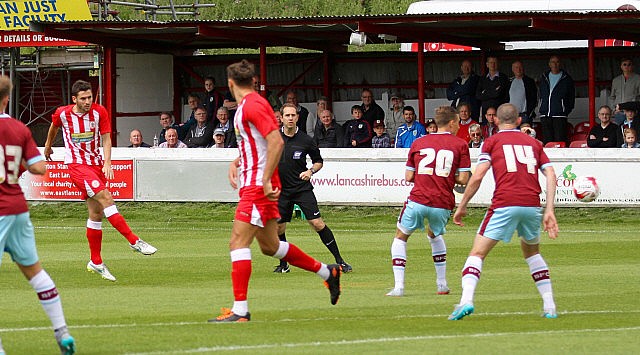 Solid base for Seamus

Stanley midfielder Seamus Conneely wants the Reds to build on their recent defensive strength to start turning draws into wins.

John Coleman’s side have conceded just twice in their last four league games, including a clean sheet at Portsmouth last weekend.

Now ahead of tomorrow’s trip to Bristol Rovers, Conneely thinks they have the basis for picking up more points.

“Defensively we’ve been very strong, we had a good clean sheet against Portsmouth, they are one of the better teams in the league, certainly going forward they will score lots of goals but we were very strong defensively,” said the Irishman.

“The gaffer has said we need to do a bit more going the other way, be a bit more clinical in the final third. We’re getting into good positions and the final ball is letting us down a bit. If we can sort that out I think we will have a good year.

“Last year we ended up conceding the most goals in the league and one of the priorities of the gaffer’s was to sort that out, which we’ve done.

“Maybe we’ve forgotten a little bit about going the other way, we need to start scoring goals as well.

“I don’t think set up defensively but we’re well organised when we don’t have the ball, everybody knows where they need to be.

“When we get the ball we are able to counter attack, we’ve got pace in the team, we get into good positions and then it’s just that final ball we need to work on and start scoring more goals.”

The team hit the road again today to prepare for the game at the Memorial Stadium against a newly promoted Rovers side who have made a good start to life back in League Two.

Despite clocking up another few hundred miles this weekend, Conneely doesn’t expect that to have too much of an impact on the players.

“We’ve 15 or 16 overnight trips this year, which is an awful lot, to have two in a row you feel it, Portsmouth and Bristol are two long journeys,” he concluded.

“It’s part of League Two though, we can deal with it, and hopefully get a result on Saturday.”