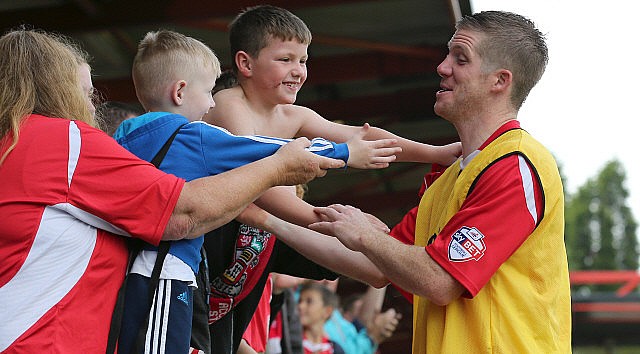 Ready to kick on: Proc

Andy Procter was relieved to be back in action on Tuesday and is now ready to fight for a first team place.

The 32-year-old midfielder admits it has been a frustrating time since he fractured a bone in his ankle at Burton in March.

He hasn’t yet started a game this season but came on after a minute of the Johnstone’s Paint Trophy defeat to Bury on Tuesday.

“I am happy I have got some minutes under my belt,” said Procter. “It was a disappointing result but it’s a step on my road to recovery.

“It has just been so frustrating. My ankle didn’t heal right the first time so they had to put it in plaster so it’s taken longer than expected.

“I have managed to get myself fit but, with games every Saturday and Tuesday, there hasn’t been much chance for me to get involved.

“There was a behind-closed-doors game with Blackburn and now Tuesday and hopefully I can kick on.

“Obviously the gaffer’s priority is the lads involved so I have had to be patient.”

Coleman does have a wealth of experience in midfield and so Procter will have to wait for his chance.

“I don’t think it’s ever been this competitive at Accrington before. It’s the first time there has been so much competition and there is a lot of quality.

Procter is closing in on Paul Mullin’s appearance record of 456 games for the Reds.

“It’s something I am not thinking about and it seems a long way off when you haven’t been in the squad for four weeks,” added Procter.

“It will be a nice accolade if it happens but I am just looking at the next game at the moment.”