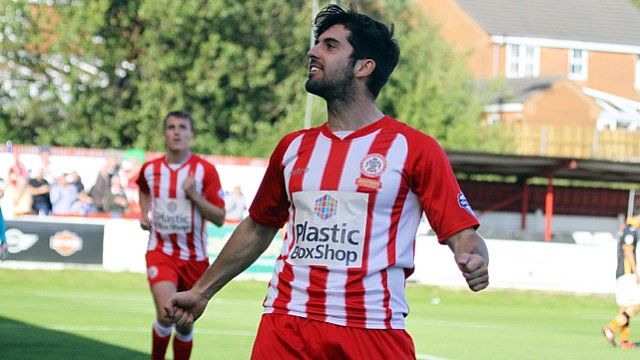 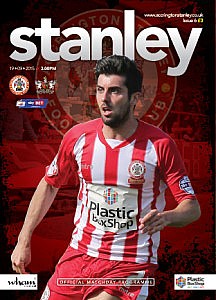 Both had experienced first team football with parent club Watford, both had been highly rated coming through the ranks at Vicarage Road and both hoped to give their careers a boost by getting some more game time at League Two level.

Fast forward back to the present day and one of those players, Piero Mingoia, has just made his 100th Stanley appearance. His team mate, Matty Whichelow, fell out of league football and joined Borehamwood.

Mingoia knows that it could easily have been him having to battle back through the non-league pyramid.

“I still speak to him,” explained the 23-year-old. “He’s done quite well actually. His team got promoted last year from the Conference South into the Conference so he’s got a step up and hopefully he can make another step up into the Football League. He deserves to get some games at this level.

“We came here together and six months later we both left Watford. I managed to stay in the league and unfortunately he didn’t. That’s the fine line right there and it’s the brutal reality of football.”

It hasn’t all been plain sailing between then and now for the diminutive midfielder. His initial loan spell didn’t see him cement a regular place in the side and the end of his contract at Watford brought a period of uncertainty and time without a club.

“I think I only made nine appearances in that first season and got a bit of an injury so I had to go back for a bit but as soon as you come here you see what this club is all about and how together everyone is,” he said. “If you accept it for what it is and embrace it you can do quite well but if you turn your nose up at it there’s only one place you’ll end up and that’s out of the door.

“There have been loads of highlights. Winning at Mansfield (scoring twice in stoppage time to win) was a crazy game that will stay with the people that played in it forever. Then there was Middlesbrough in the cup, even Leeds last year was a great game to be part of.

“I remember saying after the Middlesbrough game that three weeks ago I’d been sat at home not sure what I was going to do. A month later I’d scored a goal at the Riverside. It’s crazy how football works.” 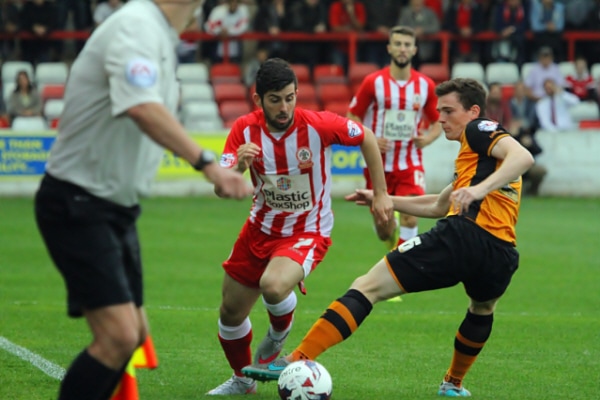 A permanent deal with Stanley brought a move north and only then did Mingoia consider himself to be really making his way in the game.

“When you’re young and you aren’t really playing at the teams you are at you can’t really classify yourself as a proper footballer. You’ve got the title but if you don’t play at the weekends and stuff like that you aren’t doing the job. After my first season here I started to consider myself a professional footballer not just a lad who got paid to be around football and plays Monday to Friday.

If his first season was an apprenticeship then last year Stanley’s latest centurion really came of age, having his best campaign in terms of goals return and sweeping the board for end of season awards, after a period when he was unable to even get into the match day 18.

He plans to continue to take the rough with the smooth and relish every minute at the Wham Stadium.

“Since I came here permanently I’ve enjoyed every minute,” he reflected. “When you lose games or don’t play well you just have to look at it, learn from it and move on. Apart from that it’s always an enjoyable place to come into and everyone has always been welcoming and treated me with respect. I try to repay that respect.

“If I’m honest I never thought I would be here for so long. I’m quite proud of getting to 100 games because some people don’t even get the chance to get to 50 games in professional football so this is something to be happy about.

“For me it’s always about the next game. You’re only as good as your next performance. I know there’s more to come from me this season and I’m just trying to work every day to make sure I can be playing as well as I can on a Saturday.”