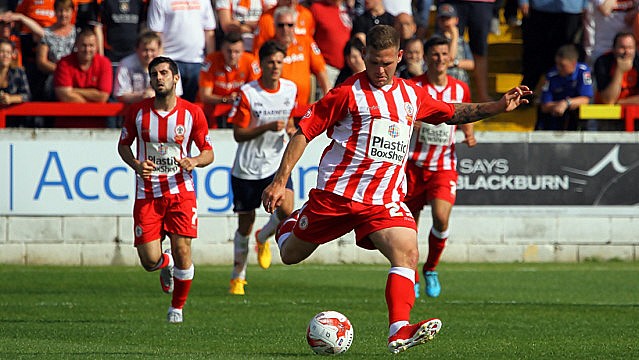 Billy Kee admitted he probably had the worst view in the Memorial Stadium of his spectacular overhead kick that won Stanley all three points against Bristol Rovers – but isn’t bothered.

The striker netted his first goal since returning to the club in the 68th minute to give the Reds a 1-0 win.

He acrobatically converted a Tom Davies header from inside the six yard box to beat former Stanley loanee Lee Nicholls but explained that it was an instinctive response.

“I’ll tell you now – I did not know what happened!” he laughed. “As I do in the box, I just got into the position and scored. I’ve done that a lot in my career and that’s another one to add to it.

“It’s just a reaction thing. I caught it well and it went in. I didn’t really see it hit the net and I’m looking forward to seeing it to be fair!

“Anyone who knows me knows I’ll score goals. I’m confident that I’ll always do that. The performance shows what the team is capable of. When we’re coming away from home we’re not looking like conceding goals and we’re winning games.

“We’ve gone on and won the game and that’s the main thing. The main positive thing for me is that we kept a clean sheet.

“To go to Portsmouth and Bristol Rovers and keep clean sheets when we know they’ll be spending money and have bigger budgets than us shows how good we are as a team.”

John Coleman’s men have conceded just four goals in League Two so far and Kee thinks that puts the emphasis on the forward players to do their jobs and secure more victories.

“The two centre backs have been awesome and Matty (Pearson) and Bucko (Adam Buxton) at full back too. You can see that from the way they are playing together at the minute. We’ve got to be better as forwards. On paper I think we have one of the best strike forces in the league but we’re not showing that at certain points. I think we need to start believing in ourselves a bit more. Jason (Mooney) and the defenders are giving us the backline to not concede. We have to win the games.”