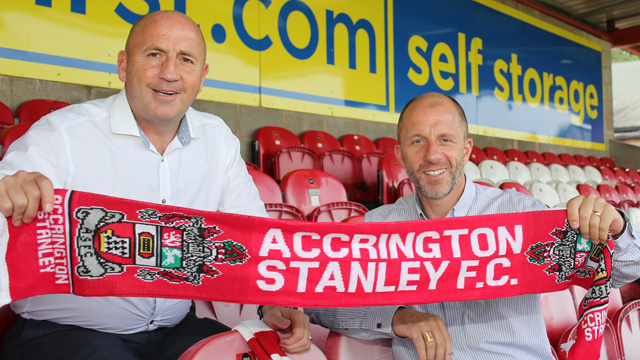 John Coleman will celebrate his one-year anniversary back at the helm at Accrington tomorrow and admits it’s been a happy return.

Coleman, alongside assistant Jimmy Bell, originally spent from 1999-2012 with the Reds taking them from non-league football into the Football League after a 44-year absence.

He left to join Rochdale in January 2012 but replaced James Beattie as manager last September.

“I was quite shocked when I found out it had been a year,” said Coleman. “When you are immersed in something time does fly.

“For me it’s a pleasure to manager in the Football League and I enjoy it all.”

Coleman picked out as one of his highlights the first game back at Northampton where the Reds won 5-4 while a disappointment was missing out on the FA Cup clash with Manchester United, after losing to Yeovil in a replay.

“That first game against Northampton was a definite highlight as was taking pre-season again after missing a couple of years,” said the Stanley boss.

“Building a squad from more-or-less scratch has also been a highlight, we kept the ones that fitted in from last season and added to them and I enjoy seeing them gel together.

“The frustrations have been missing out on the game with Manchester United, losing some players in the summer and I am always annoyed when we lose games we could have won.

“I prefer though to focus on the pluses and the positives.”