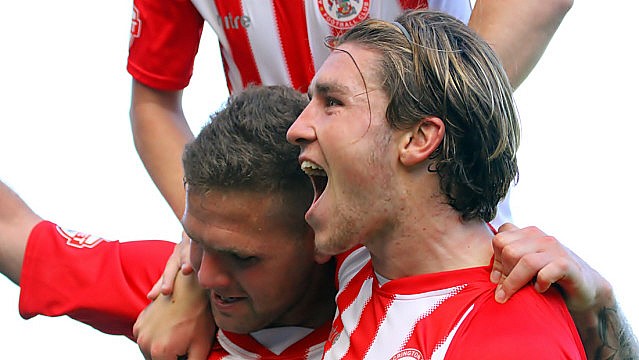 Josh Windass admitted he was thrilled to strike twice in Saturday’s win over Exeter City and notch up a first for him in the Football League.

The 21-year-old scored two goals in one first half minute to set the Reds on the road to a 4-2 win.

And it was another milestone in his Stanley career.

“It’s the first time I’ve ever done it and Jimmy Bell was shouting at me to score again and I thought to myself that it’s not that easy!” he said. “I could’ve had a hat-trick in the second half when I took it past the guy and he brought me down and I missed from the free kick.

“It’s a nice little achievement for me. I’d love to score a hat-trick but it really isn’t as easy as it sounds!

“We’re in sixth now and that’s thanks to three points at the end of the day. It would’ve been nice to win 4-0 but I think everyone just got a little tired at the end, there were a couple of changes and we were perhaps a bit disjointed. That’s not the subs’ fault, it’s the way the whole team was playing. It would’ve been nice to win 4-0 but 4-2 is still a win!

“I said to one of their centre halves when I scored that I needed that because I was having such a bad game. I thought they were battering us in the first 20 minutes but I got my two goals and we settled into the game and pushed on.”

His goals came in very different circumstances, with the first the culmination of a sweeping move and the second coming from a misplaced pass from goalkeeper Bobby Olejnik, but they moved the former Huddersfield youngster to four for the season and into position as the club’s top scorer.

“(For the first one)Billy Kee held it up in the box and I was behind their centre half and he set Piero Mingoia to cross so I pulled off and darted in. I knew Piero would play it for me, I timed it perfectly and just tapped it in.

“Me and Crooksy were watching the Football League highlights last week and someone scored the luckiest goal ever and we were on the sofa asking if there was any chance we could score one like that. We were laughing after I scored it but I’ll take those all day long. I don’t know what the keeper was doing but it was a second goal so I’m happy.

“It’s a bit of a monkey off my back to be honest because I hadn’t scored from open play so it was nice to do that and be top goalscorer.”