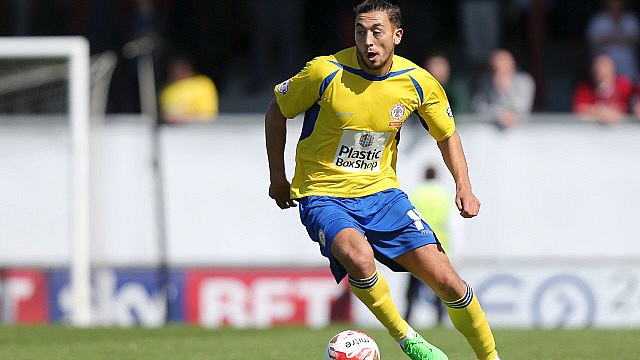 Stanley midfielder Matt Crooks hopes John Coleman was still pleased with his performance against Crawley despite not quite being able to fulfil his manager’s prediction.

The 21-year-old had a hand in all three Stanley goals at the Checkatrade Stadium, netting the second himself with a superb strike from outside the box.

And he said it was almost exactly as Coley had planned it.

“I’d had a bit of a barren spell and gone a few games without scoring but the gaffer said to me on Thursday that I was going to score here. He said I’d score two and I only got one but hopefully he’ll be happy enough with that!

“It was a nice finish. I did one in training on Thursday that went about 15 yards over the bar so it was nice to see this one creep in!

“Everyone’s dead happy with how we performed. Obviously it made it a little easier for us when they had a man sent off but we still had a job to do and we did it well.

“You have to take something from every game and we conceded twice against Exeter and weren’t at the races as a team at the end so we learned from that and kept it tight today.”

It was a third successive win for a Stanley side that have impressed in recent weeks and Crooks believes we are starting to see what they are capable of.

“We’ve got quality players all around the park and we can play good football,” he continued. “I think we showed today that we can pass it around and make spaces for each other and create goals like the ones we scored.

“Your place is never cemented. There are people who can come in and do your job. That’s only good for the team and our performances because we all know that we have to play well to stay in the team.

“The clean sheet just shows what we have in reserve. Tom Davies has been immense for us since he came in but it was nice to see Joe Wright make his first league start and I thought he coped with it really well. Matty Pearson filled in well at centre half and Liam Wakefield came on and that just shows that everyone knows their role in the back four.

“This is probably the best I’ve felt in my career so far. I’m playing regular football which I’ve never really done before, I’ve got a place in the team for now and I’ve scored a couple of goals so I’m just really enjoying my football. We have to try and keep our run going, we want to win every game and we have the ability to do it.”