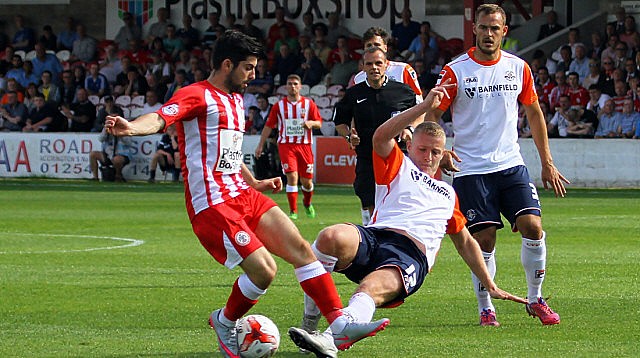 Piero Mingoia is targetting a successful season after reaching a Stanley landmark.

The midfielder notched up his 100th appearance for the club in Saturday’s win at Bristol Rovers.

He’s pleased to have made it to the milestone but won’t be dwelling on it for too long.

“If I’m honest I never thought I would be here for so long,” said the former Watford man. “I’m quite proud of getting to 100 games because some people don’t even get the chance to get to 50 games in professional football so this is something to be happy about.

“I think this is as good as the squad has been. We haven’t hit anywhere near the full potential of it yet. Defensively the shape has been fantastic but attacking wise there’s still a lot more to come from many of us. Once it all falls into shape I think we can be a real force.”

The victory at the Memorial Stadium was a first away from home this season, with Billy Kee’s overhead kick giving the Reds a 1-0 victory.

Mingoia still thinks there’s plenty more to come from a side which has developed and now has plenty of experience in the ranks.

“There are lots of leaders here. Some of the young players may not have so much experience but are quite big characters in the changing room too. It’s a good mix and when everyone pulls their weight it can be powerful.”