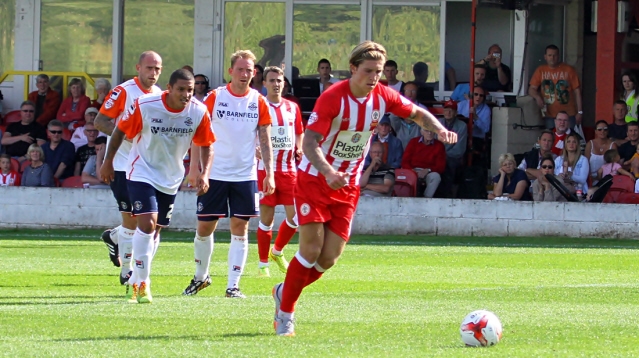 Josh Windass can’t wait for tonight’s Capital One Cup clash against Hull as he comes up against the team he supports – and the place where his dad Dean is a legend.

While it’s a big game for the Stanley players, facing former Premier League opposition, it’s a special night for the Windass  family.

“I was in bed when the draw was made and I got a text from Stanley secretary Mark Turner saying ‘I bet you are happy,'” said the 21-year-old who scored Stanley’s goal in the 1-1 draw with Luton on Saturday.

“I didn’t know what he was talking about and then the texts started coming through.

“I rang my dad and I think he was more excited than me. He doesn’t get to watch many games so I think he is glad he can come to this one and he is buzzing.

“Initially I had a tons of interviews from Radio Yorkshire, Radio Lancashire, Sky and local newspapers. It was great to speak, it was certainly a different experience.”

Dad Dean is now an ambassador for Hull and Windass was brought up supporting the Tigers. He was gutted when they were relegated from the Premier League last season.

“They still have a strong team and have only lost a couple of players from the team who played in the Premier League. They have done well to keep most of the team together” said the striker.

“ I will be willing them to get promoted – but want them to lose tonight.”