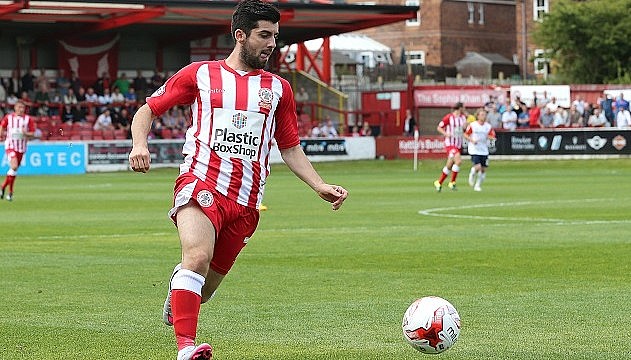 Up for the derby: Mingoia

Piero Mingoia is hoping Stanley will build on their performance against Hull at local rivals Morecambe tomorrow.

It’s ten years since the Reds last lost to the Shrimps – and 16 league games – but the winger knows that counts for nothing in tomorrow’s game at the Globe Arena.

All Mingoia is worried about is getting Stanley’s first win on the board of the 2015/6 season and he feels, if they can recreate their Hull show on Tuesday night where the Reds only lost on penalties to the Championship side, that it will soon come.

“While we were disappointed to lose to Hull, we can take a lot from the fact we pushed a top team like Hull all the way for 120 minutes. Take out the penalties, as that’s a lottery,” said Mingoia.

“We have shown what we are capable of and, if we can repeat this performance, then we can go far.

“They had top players and we can take a lot of positives in that we kept them quiet for 90 minutes and everyone stuck together and did their jobs and duties. The good thing about this team is everyone mucks in.

“We want to build on our last two performances against Luton and Hull. The record we have over Morecambe is in the past and we are only looking to the future.

“If we go there and we lose then the record has gone – what we are concentrating on is going there and picking up three points.

“It will be a great atmosphere – these are the best games to play in and it will be a hostile one for us. I remember Murph scoring the last minute goal there and that was an unbelievable atmosphere.”

Mingoia is gutted for former Stanley player Peter Murphy, Morecambe’s new captain, who suffered a serious injury on the opening day of the season.

“We are all sad about Murph and wish him all the best for a quick recovery,” said Mingoia. “We also know all about Moly (Lee Molyneux) and how dangerous he can be on his day but we have just got to concentrate on ourselves.”