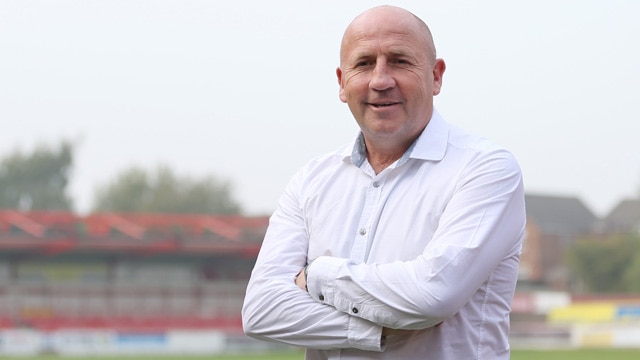 Coley: don’t write us off

Stanley boss John Coleman expects his team to be written off on the eve of the new Football League season – but is determined to continue proving the critics wrong.

The Reds continue to be amongst the perennial relegation favourites with the bookmakers despite beginning a tenth successive League Two campaign against Luton Town tomorrow.

And Coleman feels that gloomy forecasts are just par for the course.

“We can laugh about the predictions,” he said. “People will always have us as the underdogs and the whipping boys but that hasn’t happened so far and we have no intention of it starting now.

“Getting to the Football League was what we dreamed about when we came and we made it but we don’t want that status to be the Holy Grail. There’s still plenty more for us to achieve. I certainly think we have another promotion in us.

“What we’ve got at Accrington is very special and I think it’s unique in the Football League. We have to build on it.”

Visitors Luton Town arrive at the newly named Wham Stadium on the back of a season which saw them narrowly miss out on a play-off spot and now looking to do better this time round.

The visiting supporters are expected to travel in large numbers and Coleman is hoping for a response.

A number of players could make their Stanley debuts in the game with the likes of goalkeepers Jason Mooney and Ross Etheridge, defenders Tom Davies and Matty Pearson and striker Adam Morgan all having arived over the summer.

Familiar faces Billy Kee, Anthony Barry and Sean McConville are also back and that gives the manager plenty to think about.

“I’m confident going into the season,” he concluded. “People who know me will know that I’m always confident in my teams and put a lot of faith in my players. We have got a good set of lads and the one thing I’ve got now that I haven’t had in the past are very difficult team selection decisions.

“It’s not nice to have to make those decisions but you’d rather have to make them than not. We’ve got a good set of lads who work hard and for each other. They’re supporting each other. There will be an initial disappointment (for those not selected) but everyone will then be geared to getting the result. That’s pleasing.”