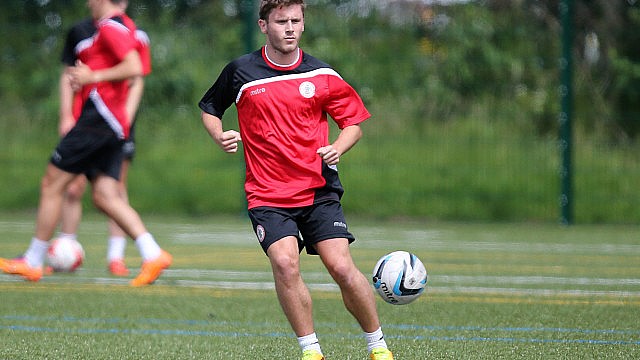 Call up for McCartan

Forward Shay McCartan is back with the Stanley first team following a wrist injury and has been boosted by news of international recognition.

The 21-year-old was hurt in a freak training incident and has missed the opening fortnight of the new campaign as a result.

But now he’s preparing for a return and will soon be off to represent his country.

“Shay’s been called up for the Northern Ireland under 21’s so he’ll miss a couple of games for us but he’s raring to go and has seen a specialist to get the all clear on his wrist injury,” said manager John Coleman.

“He’s a smashing player and gives us something totally different. I’m delighted that he’s got the call up because he deserves it for all the hard work that he’s put in recently.

“It’s good to see players in League Two getting that chance. They’re playing at a decent standard. I’ve watched under 21 games in the past and for me they don’t compare to League Two games so hopefully Shay can go away, do well and make an impression.”

McCartan has been called into the squad for the under 21’s Euro qualifiers at home to Scotland and in Iceland.

The official website will have an interview with Shay about his call up later.