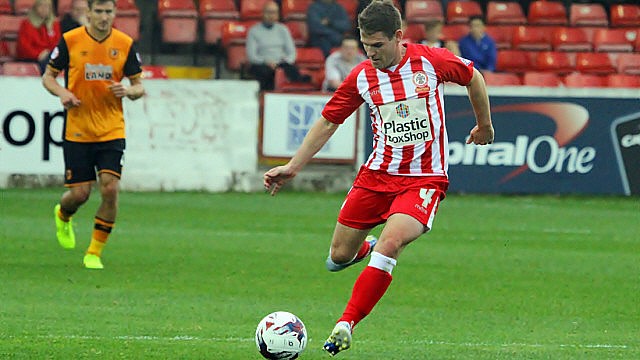 Midfielder Anthony Barry is backing Stanley to bounce back from the weekend derby defeat to Morecambe and show their true potential.

The Reds host Mansfield at the Wham Stadium tomorrow evening looking to notch up a first victory of the new season.

And Barry believes that a point from the opener against Luton has not been a fair reflection of performances so far.

“It’s been a bit frustrating to be honest,” said the 29-year-old. “We feel like we’ve deserved more out of the games and I think anyone who has watched the first three will understand where we are coming from. I think the performances have been good and that’s continued on from pre-season but even though it’s only early days we do want to start winning because it becomes a habit and a habit we want to have.

“We believe we can start that on Tuesday night. We just need to stay calm, keep doing what we are doing and we know that we will come good.

“There’s a lot of self belief in the changing room. Recent results haven’t affected our confidence. We still think we can do something special this year despite nobody outside the club giving us a chance.”

John Coleman’s side failed to find the net at the Globe Arena and lost to Aaron Wildig’s first half strike but Barry wants everyone to put that behind them and concentrate on the challenge of beating the Stags.

“I think Mansfield will be a different type of fixture. They’ll come here under a manager who knows the league well so I think it might be more of a battle but we have to focus on ourselves and what we can do.

“Possession is the way we want to go and we have the players to do it. It’s just a case of trusting each other, relaxing, keeping our focus and not changing the way we play and we’ll come through.”