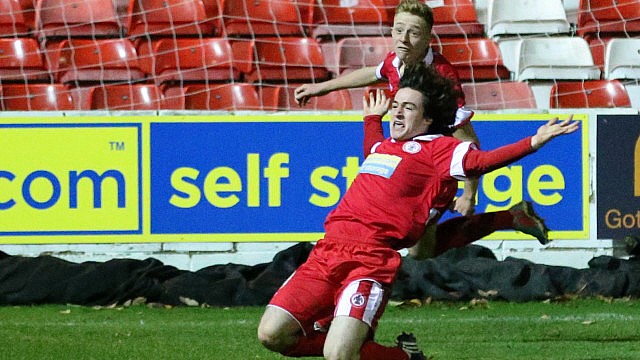 Webby wants to be a hit

Youth team player Nathan Webb knows it is a big season for him – and mixing with the first team in pre-season has helped his cause.

The 17-year-old was part of the much heralded Stanley youth team who reached the FA Cup fourth round two years ago, only to be knocked out at Reading.

Now Webb has made the step up to being involved in and around the first team this pre-season scoring a cheeky chip at Darwen for his first goal in a senior outing.

“It’s been good being around the first team,” said Nathan, who is from Glossop. “It’s a great experience and everyone has been helpful and encouraging and it certainly helps.

“I have been at Accrington four years now and it’s the second year of my apprenticeship so it’s a big year for me.

“I have to try and impress the gaffer to get a professional deal.”

‘Webby’ will certainly win over John Coleman if he carries on finishing well – his cheeky chip beat the keeper at Darwen and can’t have failed to catch the manager’s eye.

“I have to keep doing it if I want to impress him so I will have to work hard. This year I need to improve. I would love to make a first team debut this season or next season – it’s everyone’s dream to be a professional footballer and I have had a taste of playing at the senior level at Darwen.”

Nathan wants to follow in the footsteps of Stanley friends Max Hazeldine, Kealan Steenson and Keenan Quansah who all signed pro deals in the summer.

“They are good mates of mine and it’s great to see them on the fringes of the first team.

“We were all part of the youth team who reached the fourth round of the FA Cup and that was one of the best experiences of my life. It was just going to the grounds, playing in big games and the whole occasion – I want more of that.”