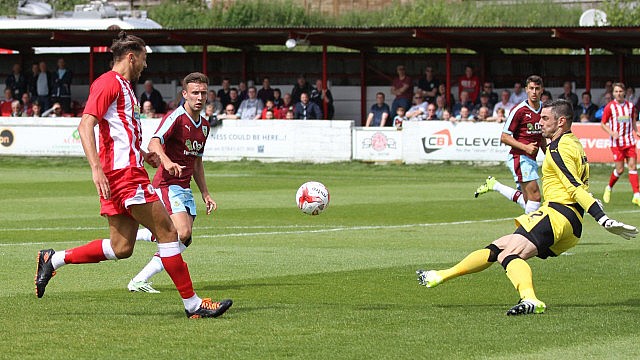 Stanley celebrated a confidence-boosting pre-season friendly victory over Burnley in the clash for John Coleman and Jimmy Bell’s testimonial game.

The management duo will have been impressed to see the Reds race into a 3-0 lead within 10 minutes against the Championship side but Sean Dyche’s men came back to 3-2 before Matt Crooks added a late fourth for the home side.

It’s thought to be the first win for Stanley over the Clarets in a pre-season friendly – and a morale boost for the Reds as the season opener against Luton gets closer.

Stanley were quick out of the blocks with Seamus Conneely opening the scoring in the second minute with the midfielder rifling home a wonder goal from 30 yards.

And it was 2-0 minutes later when a great passing move split the Clarets defence and Piero Mingoia found Crooks who chipped the ball over Matt Gilks.

Keeper Mooney did well to deny Matt Taylor from close range with his legs but it seemed every time Stanley attacked in the early stages they scored as, in the 10th minute, Sean McConville made it 3-0 after Terry Gornell’s initial shot was parried away by Gilks.

The Clarets got one back from the penalty spot after Tom Davies caught Lukas Jutkiewicz in the area. The striker dusted himself down to score the spot kick, the ball bouncing off the underside of the crossbar.

And it was 3-2 minutes later in a lively first half when Taylor’s flick was blocked on the line and it came out to Burnley’s new £3m signing Jelle Vossen who tucked the ball away on his Burnley debut.

Mooney stopped an equaliser when he dived low to keep out a Jutkiewicz strike and he kept out another close range effort from the Burnley frontman just before half-time.

Stanley stuck with the same XI after the interval with Burnley making nine changes, bringing on the likes of Sam Vokes, Marvin Sordell, George Boyd and Michael Kightly.

Coleman made his substitutions throughout the second half and one of them, Billy Kee, came close to adding a fourth on the hour but fired just wide.

But Crooks had the final say when Shay McCartan’s cross was deflected, it fell to the midfielder and the Burnley defender couldn’t stop it on the line.