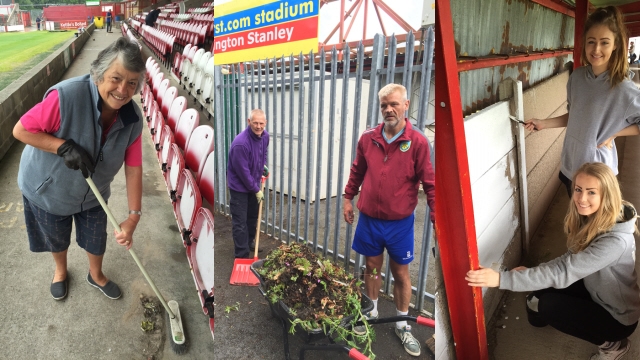 The Official Accrington Stanley Supporters Club is calling up the volunteers again this Sunday, July 12th, when the ‘Ground Force’ event is back by popular demand.

The organisation ran a successful Ground Force Weekend on June 20th and 21st, calling on fans and local volunteers to help get the Store First Stadium in tip-top condition ready for the first pre-season friendlies.

Plenty turned up, armed with brooms, paint brushes and toolboxes, and quickly got stuck in, making a real difference by tackling a variety of jobs. Supporters Club chairman Nick Westwell said: “We got a lot done and the icing on the cake was that people enjoyed it so much they asked if they could come back another day and do some more!

“Because of that we’ve organised another Ground Force day this Sunday, July 12th, from 9am to 4pm. It’s the same formula as before – if you want to help just turn up on the day and it doesn’t matter if you can only stay an hour or all day, we’ll be delighted to see you.”

Refreshments will be provided for the volunteers who turn up at the stadium in Livingstone Road and the club is particularly keen to hear from those with trade skills. For more details email: n.westwell@sky.com