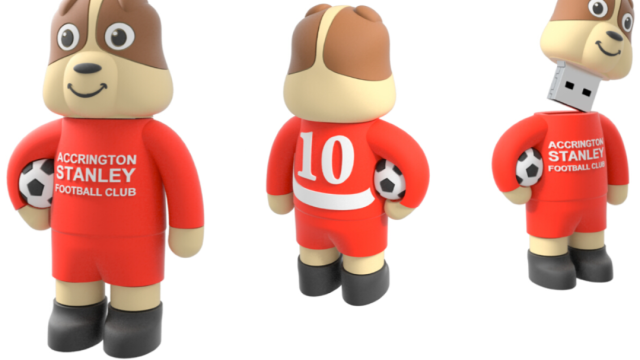 Memory stick is a Win!

A Stanley fan has created a memory stick which is close to his heart – after making it as Accrington Stanley’s mascot Winstanley.

Tom Haworth, 21, has been a Stanley fan since his dad, Graham, took him to the Crown Ground as a youngster with his brother Matt in the Reds non-league days.

Tom, from Clayton, followed Stanley’s rise into the Football League but left Hyndburn to complete a Business Management and Entrepreneurship degree at Chester University Business School.

During his time at university, he and his colleague Josh Brown set up Technospark, a business which makes customised electronic devices such USB sticks, video booklets and headphones.

“I have made customised memory sticks for a number of businesses and wanted to make one which was personal to me and also to hopefully bring in some revenue to the club,” said Tom, who bought shares in the Reds during their SOS (Save our Stanley) campaign in 2011.

“Winstanley was perfect and it all seemed to fit together. It has taken around six weeks to design and get it into the Stanley shop as I wanted it to be perfect and I think it’s fantastic – the best one we have made so far. I make sure my three work colleagues have it displayed on their desks too!”

The Winstanley USB stick is now on sale. Go to http://leescarter.com/product/winstanley-usb-gadget/