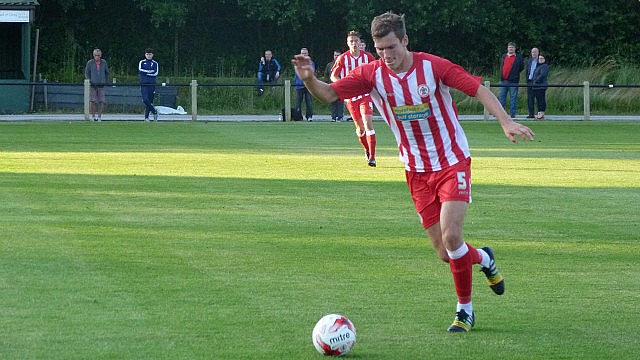 Joe has the Wright stuff!

Defender Joe Wright is keen to make his  Football League debut  – and hasn’t ruled out following it up with his first league goal.

The 20-year-old is on loan at Stanley until January from Huddersfield Town and hopes to make his league debut against Luton in the opening game of the campaign.

He was close to breaking through into the Terriers first team last season but now aims to put in some big performances for the Reds.

“I have been at Huddersfield for five years,” said Joe. “I was actually picked up quite late at 15 as I had been playing for my local team.

“I got a scholarship, then a professional deal and have been playing for the Under 21s at Huddersfield.

“I was due to go out on loan last season but we had an injury to a centre half so I made the bench and travelled to away games. I was in and around the squad but never made my debut.

“I knew I was probably going to go out on loan this season but was a bit shocked it happened in pre-season.

“I got a call off the Under 21s coach at Huddersfield Frankie Bunn who said I was off to Accrington and I was happy to come.”

Joe admits that arriving at the Store First Stadium during pre-season has probably helped him.

“You get time to adapt, to work on things and I have played alongside Tom (Davies) a number of times now and you form a relationship with each other and learn how to work together.

“Coming in July meant I had time to get used to the lads and I think that’s worked to everyone’s advantage.”

He did know Matt Crooks from his Huddersfield days and added: “I know Crooksy which has helped me settle in. I heard about him struggling to score last season but he scored some great goals at Huddersfield. I believe in him!

“My aim though is to make my league debut, play as many league games as possible, perform well and help the team.

“I will try and nick a goal and that’s probably something I need to get into my game especially for my height.

“But my main job is keeping them out and keeping clean sheets. The standard has been higher than I expected and I am getting to know the way the gaffer wants us to play. I just can’t wait for the season to start now.”