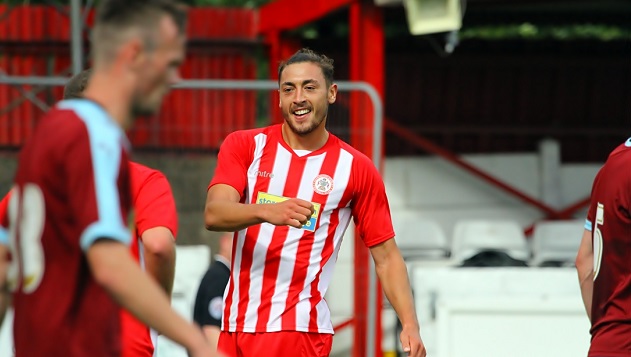 Matt Crooks admits that one goal has got the ball rolling for him in front of goal.

The former Huddersfield player said it was agony last season when he played up front and missed a number of chances for the Reds.

But he scored his first Stanley goal at Nelson midweek and followed it up with a double against Championship side Burnley on Saturday to boost his confidence ahead of the new campaign.

“I had missed a couple of chances at Nelson and I said to some of our fans behind the goal ‘I am never going to score’,” admitted the honest 21-year-old.

“They kept cheering me every time I went into the box and then when I finally scored, I had to go over and hug one of them!

“I know it’s an old cliché but once I got one, I just felt more composed in front of goal and now I feel like I can now take my chances.

“I did have composure in front of goal last year but I just didn’t show it! Now I have a pre-season under my belt, my confidence has come and two goals against Burnley was nice. I was happy with that.”

Crooks admitted it was hard last season when he was played as a striker while on loan with the Reds although he says his more natural position is midfield where he has played recently after signing a permanent deal.

“I tried to pretend it didn’t get to me last season but it did inside so to get three goals in two games is massive for me and I feel like I can get more and hopefully carry it on into the league season.

“I have played as a defender and a striker in my career but midfield is a more natural position and the current 4-2-3-1 formation suits me more. Hopefully I can cement my place in the side for the start of the season.”

Crooks is impressed with the new-look squad at the Store First Stadium. He knows defender Joe Wright from his Huddersfield days and also striker Adam Morgan.

“Morgs was an unbelievable player at youth level and I played against him a number of times as kids. It’s funny we are now playing alongside each other and he is a great player.

“It is new-look squad but we are playing well together. It was a bit nuts when we went 3-0 up against Burnley in the first 10 minutes but the gaffer had told us to press and be on the front foot and it worked in that opening period.

“We then took our foot off the gas a little bit but we have more friendlies to work on it and I can’t wait for the season to start now when it all counts.”