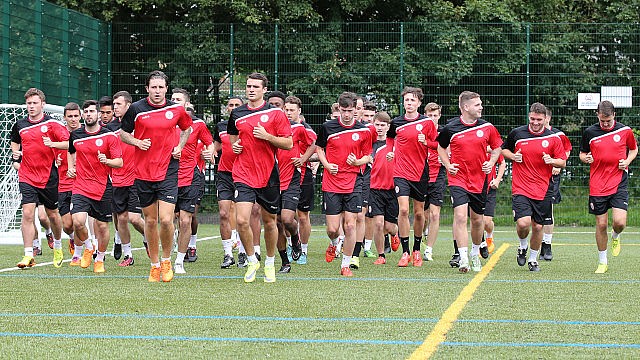 Superb goals from Stanley’s new young professionals Kealan Steenson and Max Hazeldine were not enough to give the Reds a win at Colne FC.

It was the North West Counties Premier Division side who took the lead through Accrington-born Jason Hart, who fired past Chris Evans in the Stanley goal.

However the Reds, who had the slope advantage in the first half, came back with Steenson scoring a stunner which found the top corner of the net.

Hazeldine, who like Steenson signed his first professional contract in the summer. then scored two in two minutes with another superb strike from 25 yards out and then a solo effort, running in on goal, to give Stanley a 3-1 lead at the break.

Coleman swapped his team around at the break, bringing on more youth team players and trialists and it was Colne who then stepped up a gear and used the slope to their advantage.

Stanley’s England youth team goalkeeper Jack Little had to be at his best to keep out a number of strikes but he could do little as Danny Boyle scored a double, with a Joe Garvin goal sandwiched in between, to give Colne a 4-3 victory.