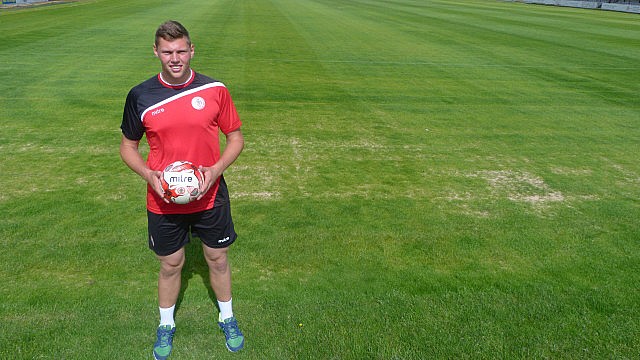 Goalkeeper Jason Mooney has signed for Stanley after he left York City.

The 26-year-old, who stands at 6 foot 9 tall, has penned a 12 month contract at the Store First Stadium.

His previous clubs include Wycombe, Tranmere Rovers and York City.

John Coleman said Mooney will be battling it out with Ross Etheridge for the number one spot and is delighted to have the goalkeeping situation sorted at the start of July.

“It’s something we haven’t had for a long time, as long as I can remember, two goalkeepers having started pre season,” said the Reds boss.

“It didn’t happen for Jason at York for whatever reason but he went on loan to Alfreton where he enjoyed his football and did well. It’s a chance for him to show what he can do as a league keeper.

“He is big but that’s not the reason he is here. He is keen and keen to work hard and do well and that’s the kind of players we want here.

“There is no number one and number two keeper. It will be whoever is best on any given day and whichever one is chosen, the other will support them. It’s down to them to battle it out.”

“Coming here was a no brainer for me,” explained Northern Irishman Mooney. “It’s the chance to have a clean slate and maybe prove some people wrong. Hopefully I can get regular games because that is the reason that I’m in football.

“In my short career so far I think last season is the first one where I didn’t do myself justice. That just makes me want to try even harder this year to show what I can do and help Accrington be successful. That’s what I’m going to do.”