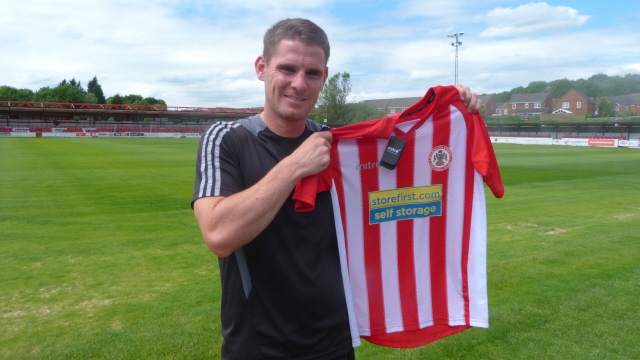 Midfielder Anthony Barry has signed a one-year deal with Accrington Stanley and is determined to show what he can do.

The 29-year-old is in his third spell back with the Reds, after being on loan at the Store First Stadium last season, and has signed a permanent deal after securing his release from Forest Green Rovers.

“I am made up to be back,” said Barry, who was first with the Reds in the 2005/6 Conference-winning season. “It’s been a long summer sorting everything out.

“At some stages I didn’t think I would be coming back here, I thought I would be back there but we finally got it done.

“Last season was really bitty for me. I missed pre-season and I wasn’t doing a lot of training at Forest Green and so I was playing catch-up.

“I came here and didn’t really show what I can do. I was talking to the gaffer (John Coleman) all over summer and I said I didn’t want to come back and have the same sort of season. We had a good chat about how this season can be different and hopefully it will be.”

There was interest from other clubs over the summer but Barry said he wanted to come back to the Store First Stadium.

“I spoke to a few other clubs but I wanted to come back here as I felt I hadn’t shown anyone really what I could do.

“Accy is always one of those clubs where people leave with good memories and they go away and for, whatever reason, find themselves back here – I am the same and there are a few others who have returned.”

Barry has high hopes for this season as, with Luke Joyce moving on to Carlisle, he wants to make the midfield slot his own.

“It was hard watching Luke last season as he was playing really well and there wasn’t room for me to get a chance. While I was delighted he was doing well, he has now made his move and I wish him good luck but it does mean there is now a space to hopefully show what I can do.

“We have a good set of lads here now. I know the gaffer will never accept just being in this league. He is the one who got us here and he is the one who wants to put us in League One and he has drilled that into us.

“I know when he was meeting players over the summer, their ambitions had to match his and you can feel there is a huge hunger to prove the critics wrong.”