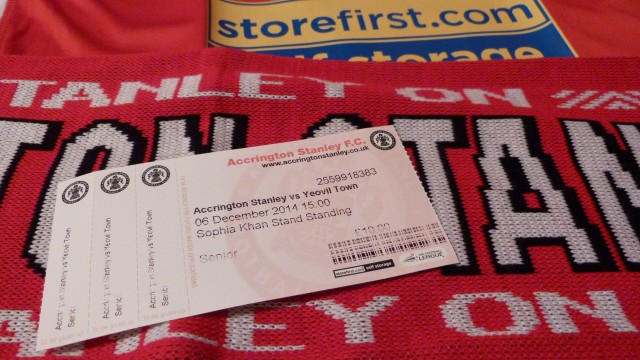 Accrington Stanley are offering long serving supporters the chance to buy special season tickets – allowing them to come to home league games for the next 20 years!

In response to requests from a number of supporters, over 65’s can now purchase tickets that don’t just guarantee football at the Store First Stadium for 2015/16 but right the way through until 2036.

With the price set at the same as five years’ of season tickets at current rates, that means you’ll get 15 campaigns for free!

“This particular initiative was one actually suggested to me by some of our more vintage supporters and I think it is a great idea,” said Stanley Chairman Peter Marsden. “Not only do our Golden Oldies (who have earned their stripes) get a chance to buy a season ticket for the next 20 years at a favourable price but it gives the Club a little more cash during the close season.”

The ‘Super 60s’ scheme offers a season ticket for the next 20 years, plus the opportunity for a ‘guest’ to attend an additional 5 games per season for the duration of the ticket.**

To sign up for this great value-for-money offer call 01254 356950 or email info@leescarter.com

Methods of payment we are able to accept:

By direct bank transfer to:

** To be chosen from specific Football League games