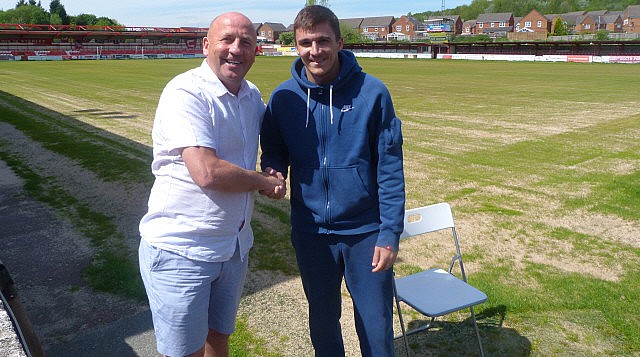 The 21-year-old becomes John Coleman’s third signing of the close season, agreeing a one year deal at the Store First Stadium.

He recently left Huish Park and is looking forward to a fresh start in Lancashire.

“The manager’s given me this opportunity and the chance to play football and that’s all I’ve ever needed,” he said. “I just want to show people what I can do and this club has given me the chance. I don’t want to let myself or the club down.

“I’m a goalscorer and I need to be on the pitch as much as possible. I feel like I will score goals if I get time on the pitch so I want to play as many games in a row as possible, get in my stride and all I need is one goal to get going.”

Morgan enjoyed a prolific start to life in the game as a teenager, culminating in three appearances for the Liverpool first team. He’s also spent time on loan at Rotherham and St Johnstone but is now looking forward and not back.

“Liverpool is all back in the day for me,” he insisted. “It was a great time to be at the club but I can’t dwell on Liverpool. I don’t really want to talk about what happened at Yeovil but it wasn’t a nice time for me and I just want to start again here. I know that you don’t become a bad player overnight and I want to prove that I can still score goals and contribute to the team.”

“It is a great chance for both of us,” explained Coleman. “We haven’t got that many forwards and it’s a chance for Adam to resurrect his career. He has a great pedigree, he is highly thought of at Liverpool and he will be as frustrated as anyone that it hasn’t got going for him. This is an opportunity for both of us and hopefully Adam will grab it with both hands.”