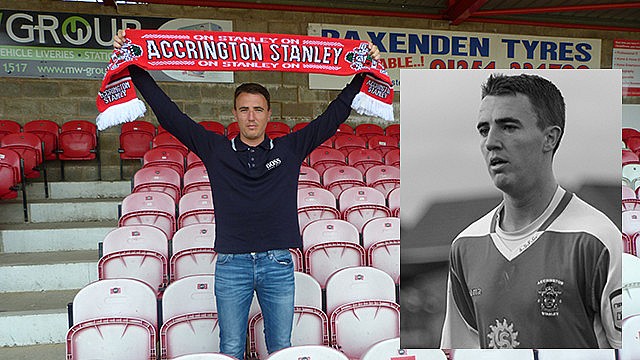 Sean McConville admits leaving Stanley was a bad career move – and is now looking to make up for lost time having returned to the club.

The midfielder has signed for the Reds from Chester for an undisclosed fee, four years after departing the Store First Stadium and the Football League when he penned a deal with Stockport County.

The decision followed a red card in the play-off semi-final against Stevenage and is one that the 26-year-old isn’t happy that he made.

“I think I was young and naïve at the time and if I’m honest it’s a decision that I did regret,” he said.

“I’ve held my hands up and told a few people that I was wrong to do it. You live by your mistakes and I like to think I’m a bit more experienced now and I’m just looking forward to putting the shirt on again, score as many goals as I can and help Accrington have a better season than last season.

“I’d say my first spell here was as good as my career has got so far. I had a successful season last year with Chester, scoring a few goals from midfield, but that play-off season was definitely the pinnacle of my career up to now. I’m just looking to get back there again and just enjoy it.

“A lot of the players left after that season but I think that comes with success. Players moved on to different things, some successful and some not, but hopefully with the gaffer and Jimmy (Bell) building a squad with the players that stayed on from last year we can push on and be pressing for those play-offs again.”

McConville will find some things have changed at the Store First Stadium but there will be plenty of familiar faces too, including manager John Coleman and his assistant Jimmy Bell. He’s can’t wait to start working with them again.

“A return to league football was a big reason for coming back. Ask any player and they’ll tell you that it’s a massive thing. As soon as you drop out you realise how good playing in the Football League is. I’m sure the gaffer will tell you that he would’ve been made up with any Football League appearance. Now I’m back I plan to work hard and try to stay here.

“As a player I haven’t changed much. It’s more mentally; I’ve got more experience and I know what stuff is about. I know that the grass isn’t always greener. I’m coming back with my eyes wide open, I’m going to give it my all, work hard in pre-season, score some goals and try to do as well as I can.”