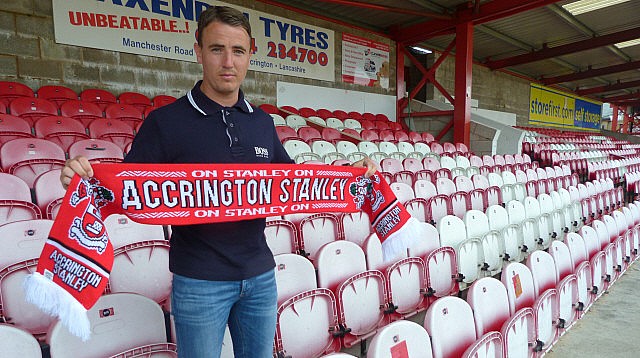 Sean McConville is back at Accrington Stanley, joining the club for a second time.

The midfielder, who was part of the team that made the play-offs in 2011, arrives for an undisclosed fee from Conference club Chester.

The 26-year-old has penned an initial 12 month deal at the Store First Stadium.

“Everyone at Accrington knows about Sean,” said manager John Coleman. “He scored a lot of goals in the season we reached the play-offs and he had a really good season at Chester last year where he was their Player of the Season.

“He is keen to show what he can do especially in the Football League again. He has another chance to go out there and make a name for himself and he has grown up a lot since his first time at the club.

“He will score goals and he is an intelligent player and he is keen to show the fans an even better Sean McConville than the first time he was here.”

“It’s a bit strange to be back but mainly it’s exciting,” said McConville. “When I left we were in the play-offs so hopefully I can come back now, try to right a few wrongs and get the club back into the play-offs or better.

“I felt I did well with Chester last season and I just want to kick on again now, hit the ground running in pre-season, get myself as fit as I can and then get myself into the team and score and assist as many goals as I can.”