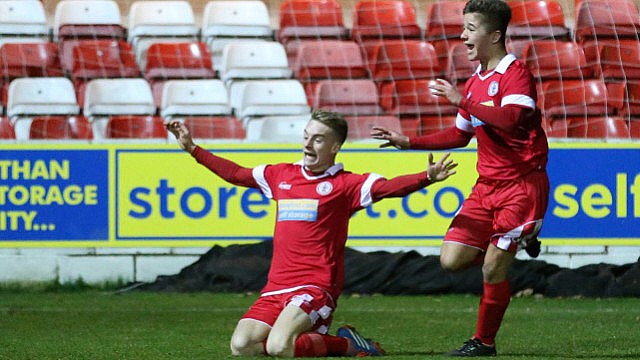 One of Stanley’s new professionals is backing the club to produce more players in the future as the Academy goes from strength to strength.

Max Hazeldine is one of three products of the youth system handed deals for the new season at the end of his apprenticeship and along with Keenan Quansah and Kealan Steenson began life with the first team at the end of the season.

All three were regulars in the under 18’s side last season and Hazeldine believes more youngsters will make the transition soon.

“There are some great players coming through the youth team,” he said. “I really rate the two centre backs (Dylan Smith and John Roberts). They are like opposites. Robbo likes the ball at his feet and is dead cool and calm and Dylan is like Dean Winnard. He comes through everything and is a defender’s defender.

“Up front Webby (Nathan Webb) and Jack Hartley are great. If I was an opposition player I’d look at Webby and think I was in for an easy ride but he’s just so good.

“Hopefully us getting pro deals can give the youth lads confidence. If nobody got a contract then they’d be thinking they had no chance of getting a contract but now people have it gives them the incentive to go and get one for themselves.

“If the club will take chances on young players then they’ll be prepared to take more on in the future. They just have to work hard. They know that the contracts will be available to them if they do that.”

Hazeldine made his first team debut as a substitute in the last away game of the season, at Dagenham, and is excited about the challenge ahead.

“I think it’s better to be here than at another club because there’s no reserves, no under 21’s and the club will use young players in the first team because they don’t have loads of money.”

The teenager has come back from a long term knee injury and Hazeldine is relishing the second chance he’s been given when pre-season training begins.

“When I was sitting at home on our sofa all day with my knee all swollen up in a big cast I never thought I’d come back like this,” he admitted. “When I did it the second time I wanted to give up. My dad and my mum were great and told me not to give up and to just keep going. I came back and started playing well.”