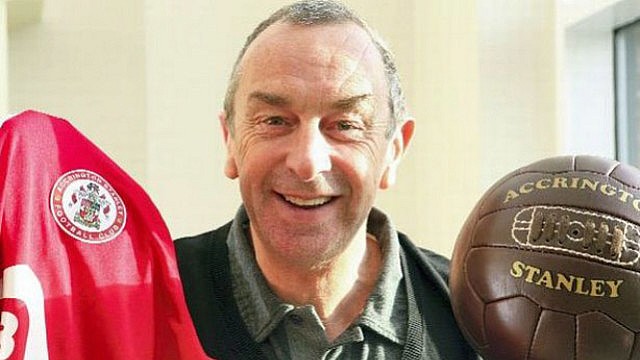 One England manager famously refused to let his players use the changing facilities at Accrington Stanley’s ground.

Now another England coach and passionate supporter of “the club that wouldn’t die” is backing a fresh bid to bring the changing rooms at its Crown Ground up to scratch.

It was in 2010 that Roy Hodgson, then manager of Fulham FC, travelled to Accrington Stanley for an FA Cup tie with the famous Lancashire side. But after taking one look at the club’s spartan changing facilities, Hodgson marched his squad back to their nearby hotel to change.

Now a bid is under way to raise £25,000 to bring the changing rooms up to modern standards, and another national sporting star and former England coach is right behind it.

Lancashire and England cricketer David Lloyd, who later coached the England team, is Accrington born and bred, growing up just a stone’s throw from Stanley’s former Peel Park Ground. A lifelong supporter of the club, he said: “Accrington Stanley’s been my life since I was about seven years of age.”

He even had a spell playing for the club in the 1960s in the Lancashire Combination, before his talent for cricket took his sporting career in a different direction. But even as a passionate fan, Lloyd – now best known as a TV commentator and cricket writer – admits the Accrington ground needs work.

“We need to bring it up to date,” he said, “the players need better changing facilities.”

That is why he is backing a fundraising push by the Official Accrington Stanley Supporters Club. It has launched a grand raffle, aiming to raise the £25,000 needed to rebuild and refurbish the outdated changing rooms. It has already passed the £5,000 mark, with Lloyd happy to put his hand in his pocket for his own tickets.

And it’s not the first time the club’s loyal fans have done their bit to improve their “second home” – the changing rooms at the original Peel Park Ground were built by the supporters club in 1937.

Tickets, at £5 each, are being sold by supporters and from the club shop, with the winners to be drawn at a Saturday home game in October this year. First prize is £1,500 cash, with other prizes including £500 cash, a new season flexi ticket, a colour TV, signed club merchandise, a day out at a professional racing stables and a round of golf with two of the Accrington players.

Supporters club chairman Nick Westwell said he was delighted with how the raffle was going so far, with a great response at this month’s Accrington Food and Drink Festival. But he also urged more fans to follow David Lloyd’s example and buy their tickets.

“We are trying to bring everyone together as one and to get the local community, and anyone who loves football, right behind this bid to make our club more comfortable and welcoming for players and visitors alike,” said Nick.

Raffle tickets can also be bought direct from Nick by emailing n.westwell@sky.com